Tweeddale and the Province of Peebles 1654

“scattered by the force of the fish as they burst out, losing the footholds which they have endeavoured to make and strengthen for themselves. Nonetheless they catch in nets and wicker-baskets an incredible number of eels and other river-fish, and make no small profit from it.” 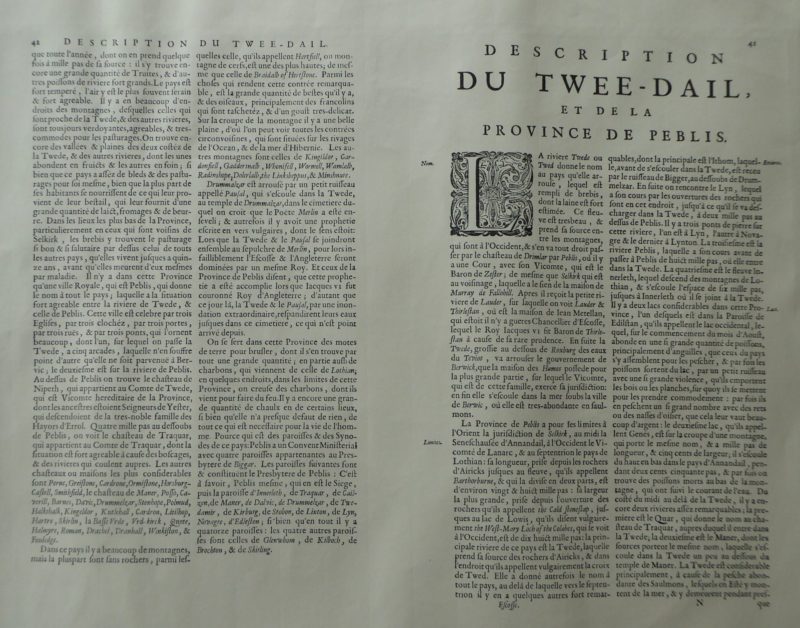 The Tweed flows through a valley named from itself, full of sheep whose wool commands a high price. It is an outstanding river, rising far inland to the west among mountains, carried down as if in a straight channel through the castle of Drumelzier and the centre of Peebles, which has its own Sheriff Lord Yester, as too the neighbouring Selkirk has its from the family of Murray of Fallowhill. Then it takes in the Leader Water, at which Lauder may be seen, with Thirlestane; there is the very beautiful house of John Maitland, quite recently Chancellor of Scotland, who for his singular prudence was created Baron Thirlestane by King James VI. From there the Tweed, increased below Roxburgh by the foreign waters of the Teviot, runs through the Prefecture of Berwick, possessed in large part by the family of Hume and in which the head of that family now exercises the jurisdiction of Sheriff; and it slips into the sea, very productive of salmon, below Berwick, the most fortified town in Britain, of which I have spoken.

The Province of Peebles is bounded on the east by the prefecture of Selkirk, on the south by the Stewartry of Annandale, on the west by the sheriffdom of Lanark, and finally on the north by Lothian. In the middle in length it stretches from Eric Stane to the stream which is in the vernacular called Barthorburn, more or less twenty eight miles. At its widest, between the cleft of the icy rock, in the vernacular the Cauldstaneslap, to the eastern lake of the Lobii, in the vernacular ‘the West-Mary Loch of the Colaebes’, it extends for eighteen miles.

The principal river by which it is irrigated is the Tweed, whose fount and source is at Eric Stane and the place commonly called Tweed-cross. This river runs through the whole province at its longest; from it the whole province was once given the name Tweeddale. Beyond this river to the north there are several streams worth mentioning.

First is Holms Water, which Biggar Water takes in before it slips into the Tweed, a little below Drumelzier. Next there is Lyne Water, running down from the Cauldstaneslap for nine miles, until it discharges into the Tweed two miles above Peebles. This stream is crossed by three stone bridges, one at Lyne, the second at Newlands, the third at West Linton. Third is Peebles Water, flowing from the fringes or boundary of Lothian, measuring in its course eight miles before it reaches Peebles, where it flows into the Tweed. Fourth is Innerleithen Water, coming from the foot of the Lothian hills for six miles as far as Innerleithen, where it flows into the Tweed.

The more noteworthy lakes in this Province are two: one in the parish of Eddleston, which they call the west lake. In it about the first of August, such a great quantity of river fish, especially eels, abounds that, in a favourable wind (that is, one blowing from the head of the lake in the direction of its flow, where a little river breaks out), the local people, gathered there for the fishing and standing ready in the outflow of the lake for the opportune moment of taking them, are sometimes scattered by the force of the fish as they burst out, losing the footholds which they have endeavoured to make and strengthen for themselves. Nonetheless they catch in nets and wicker-baskets an incredible number of eels and other river-fish, and make no small profit from it.

The other lake, which they call Genens, occupies the summit of a mountain of the same name, and is a mile long and half a mile wide; its outflow falls into Annandale at a huge cliff, twelve hundred feet from the top of the mountain to the plain that joins the foot of the mountain; there fish are often found which have fallen from the cliff to their death.

Beyond the Tweed to the south are two noteworthy streams, viz. Quair Water, whence the castle of Traquair takes its name, near which it enters the Tweed; and Manor Water, rising from a spring of the same name, which slips into the Tweed a little below Manor Church.

What makes the Tweed an especially notable fishery is the great abundance of salmon, ascending it from the sea in summer and staying there for the greater part of the year; some are caught a mile below the head of the Tweed. In this as in other rivers and streams of this Province there is a very abundant supply of fat and healthy trout and other river fish.

This region enjoys a temperate climate and for the most part clear and quiet air. The land often swells into mountains; those which closely overlook the Tweed and the banks of the other rivers on either side are green, lovely and very suited for pasture. Here too there are many valleys and plains lying on either bank of the Tweed and the other rivers; some of them produce grain, some hay, so that this Province is self-sufficient in corn-fields and pastures.

Nonetheless the people for the most part live from flocks and herds; for from these they are afforded an abundance of milk, cheese and butter. In the more low-lying places in the Province, where it comes closest to Selkirk, sheep have such healthy and dry pasture that, what scarcely occurs in other regions, they reach their fifteenth year before dying of old age. In this Province there is only one Royal Burgh, or city, called Peebles, from which the whole Province takes its name; it is situated in a very fine location, viz. between the River Tweed and Peebles Water.

This town is famous for five threefold ornaments, that is for three churches, three bell-towers, three gates, three squares, and three bridges; one of these, which crosses the Tweed, has five arches (the Tweed has no other bridge until it reaches Berwick), another of two arches rides over Peebles Water.

Not far above Peebles is Neidpath Castle, belonging to the Earl of Tweeddale, hereditary Sheriff of the Province, whose ancestors were formerly called Lords Yester, descended from the most noble family of the Hays of Erroll, and in ancient times lived in these two places.

There are many mountains in this Province, very few if any of which are rocky. In size and height the others are surpassed by the mountain of the deer (in the vernacular Hart Fell) and by Latodunum of deer-stone (in the vernacular Broad Law); the latter is commended among other features by a great supply of animals and birds, especially francolins variegated with white markings, of the most delicate flavour. On the summit of the mountain a broad plain extends, from which one can see all the regions round about, lying between the great Ocean and the Irish Sea. The remaining mountains are Kingledoors, Cardon Hill, Gaddersnalb, Whonifell, Wormell, Wamlalb, Radinshope, Dollar Law, the Linksbeppus and Minchmuir.

A small stream called Pausalia flows past Drumelzier, entering the Tweed at Drumelzier Church. There is a tradition that in its cemetery was formerly buried the seer Merlin, and a prophecy was formerly related in vernacular verse to this effect:

Whenever the Tweed and Pausalia run together at Merlin’s grave, then too without doubt the Scots and the English will be subject to the rule of one and the same King.

Peebleans assert that this prophecy was fulfilled on the day that James VI was crowned King of England, for on that day they say that the Tweed and Pausalia, rising in a novel and unusual way, overflowing their channels and pouring their waters out on both sides, had the meeting foretold in the prophecy in the aforesaid cemetery at Merlin’s grave; this occurred then for the first time and has never happened again since that time.

Fuel in this Province is partly sods and peats, of which there is a great supply everywhere in the whole Province, partly coal, which in some places is imported from Lothian, while elsewhere it is supplied from a coal-shaft within the bounds of Peebles itself. There is also a great abundance of lime in various places in the province; so that almost nothing is wanting in this Province, which is necessary for man for daily use, whether one considers food, or clothing, or hearth.

As for the parishes and presbyteries of this Province, in it there is one whole presbytery, that is Peebles, together with four parishes belonging to the Presbytery of Biggar. The Presbytery of Peebles consists of these parishes and these alone: Peebles, where is the seat of the presbytery, Innerleithen , Traquair, Kailzie, Manor, Dawyck, Drumelzier, Tweedsmuir, Kirkurd, Stobo, West Linton, Lyne, Newlands, Eddleston. In total fourteen parishes. The remaining four parishes are Glenholm, Kilbucho, Broughton and Skirling.

LAUDERDALE (May have been inserted by Blaeu in 1645)

The valley of Lauder or Lauderdale takes its name from the Leader Water.

This river rises in the mountains which separate this region from Lothian, and increased by various streams heads south, and discharges into the Tweed. The city and castle of Lauder adorn this valley, as does the Lordship of Thirlestane. On the east it is coterminous with the Merse, on the south with Tweeddale, which also encloses the west side. Lothian is to the north of it.  Of this region, as also of some others, a full description had been promised by the illustrious and noble Lord John, Earl of Lauderdale etc., but as he took the Royal side in the recent British wars and was captured at the battle of Worcester, he is prevented from doing so (1). Enjoy these, Reader, until he has been restored, or some other has provided better.