A STORY ABOUT THE REIVER KINMONT WILLY

Text from the story telling of Peter Shaw, at Carlisle Castle.  Click here for violent life and grave slab 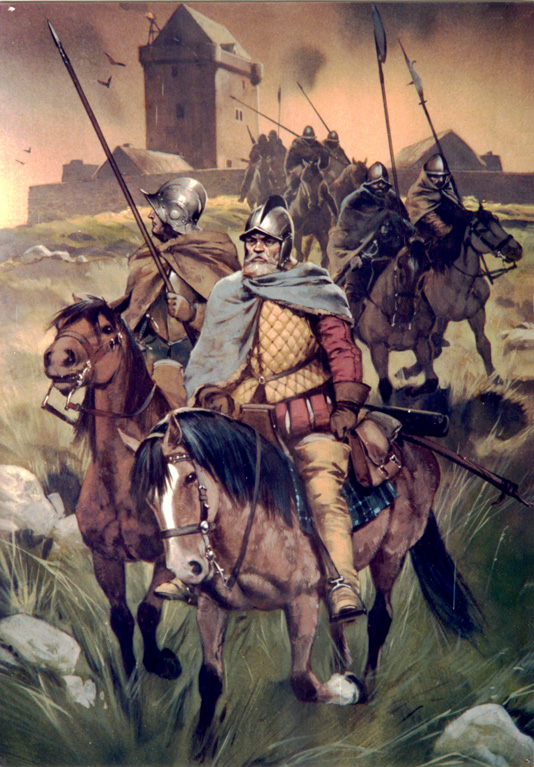 Kinmont Willy was a famous Armstrong reiver who commanded 300 men. He lived north of Carlisle and was a Scottish Armstrong, and he usually travelled to English Tynedale to reive (rob). Anyone who was robbed would work out the value of their loss and argue for compensation at a truce meeting where differences were settled, tales swapped and beer drunk. Peace must reign from sun up to sun set on a truce day, but the English of Carlisle wanted Willy very badly, so they waited patiently.

They arrested Kinmont Willy because they knew where the border was. It was the river Liddle. If they were on the north bank they were in Scotland and if they were on the south bank they were in England. They knew where the border was in that case. He thought he was quite safe because he was on his Scottish side of the border, but he had fewer men than the English men. So the English lads were going down the south bank and Kinmont Willy was going up the north bank to Langholm.

When they came to the parting of the ways, one to Carlisle, the other to Canonby, I think Willy shouted rude things about Lord Scrupe. Now he should not have done that because the English lads looked around, saw that there few no other reivers keeping watch and said “Lets get him” – so they did. So these Carlisle lads called Carlton and his gang captured Kinmont Willy, took his sword off him, bound his legs underneath the horse and brought him in chains to Carlisle castle and locked him up. Sir Walter Scott wrote about this in one of his tales.

They brought him back to Carlisle to meet the feared Lord Scrupe who had been trying to catch him for years. Kinmont Willy was 40 when they arrested him. Now someone doesn’t become bad at 40 – it just means they haven’t caught him before then. However, Lord Scrupe was absent and the deputy warden Salkeld was in charge of the castle on the day Willy was captured. Carlton boasted to to Salkeld “We’ve done him” but Salkeld said that they shouldn’t have because it was a day of truce. But, what’s a day of truce – is it from sun up to sun up or sunset to sunset because that was the real argument. Because they had caught him at sunset. They brought him here.

Now once you have captured someone like that you are very loathe to let him go. So Salkeld sent for Scrupe. Scrupe came here and there is no record of his exact language though I think he was a little bit upset, but he wouldn’t let him go. He said “I’ve got you now and I am keeping you”.

The lads who escaped when Willy was captured went straight to the Duke of Buccleuch who ganged up with Willy’s Armstrong family – the thought of getting into Carlisle castle was too much temptation. 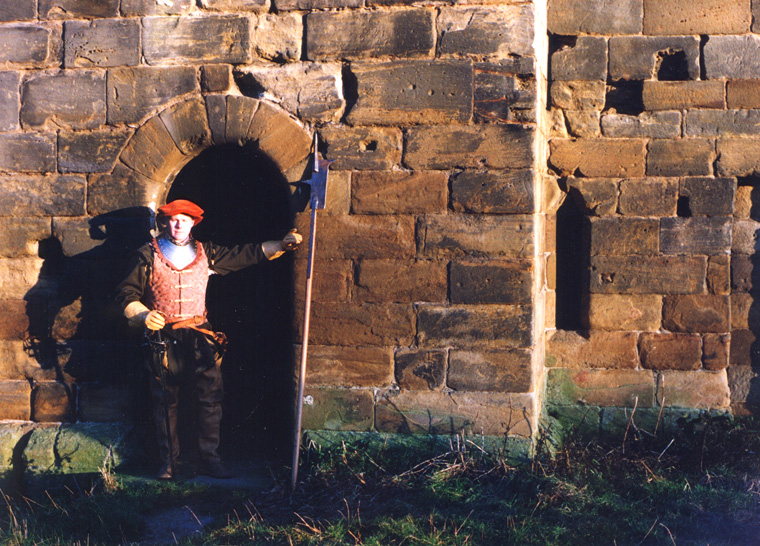 oom in a tower, a good strong room. Some of us think that’s where he was put – he was not in the dungeon. According to the Scots he was fettered up with leg irons and all sorts of things. Anyhow, the Scots got together and they picked a very bad night when it was pouring with rain, the wind was blowing and they knew that the guards wouldn’t be taking much notice. They crossed the Solway, they crossed the Eden in flood.

They came to the wall and set a lot of their chaps further down the wall between themselves and the Irish gate because they didn’t want the guards to come rushing out of the Irish gate and surround them. They made a lot of noise to try and think it was a Scots army that had appeared. There was a little bit of collusion because they came expecting the little gate to be opened. But they did come with crowbars and when the gate wouldn’t open they took the gate out of the wall. They got a hold of Kinmont Willy, according to the Scots, they killed two or three guards one lot said he was in the town and they killed people in the town.

The other story is that the guards the following morning, when questioned by Lord Scrupe did not hear a thing. Now just because one of the guards may have been called Graham and one of the maids Armstrong does not say that there was any collusion inside the castle, but when they got him out they are supposed to have taken him to Smithfield where the Smith took off his fetters. That is Sir Walter Scott’s story. How to turn a criminal into shining armour. But, you can’t really call him a criminal because everyone else was doing the same thing around here. It was called survival. The aftermath of that was that the Duke of Buccleuch wrote letters to London and Scrupe wrote letters to London excusing themselves and blaming everyone else. Kinmont Willy got away.

They caught him a few years later and hung him.  See gravestone.