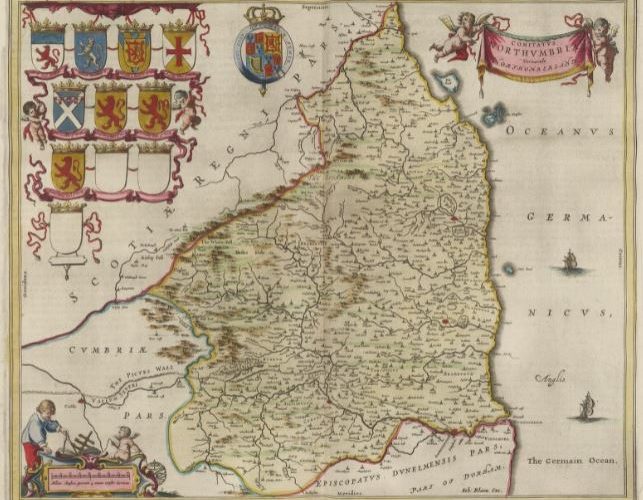 The map has been digitised by the National Library of Scotland website and can be zoomed with the scroll wheel of a mouse or click the +- on the map.

The National Library of Scotland website contains Blaeu Atlas of Scotland 1654 but this text is translated from the French on the reverse of a map and has not been translated by NLS, however it is likely to be based on text from Timothy Pont and Robert Gordon and from Camden: Britannia 1607

According to Ptolemy, after the Brigantes, there followed the Ottalini, or Ottadeni or Ottadini according to different examples.  I would prefer to say the Ottatini with little change, to signify those (people) from the river Tine (Tyne) who represent the situation of this area.  In effect these people came from Tine in Wales passing the river Girway, the Veh-mynyth mountains, the Vch-coed forest & the river Girway which the British call today Vch Gwyrway.  It’s not ridiculous to see why, having name the area Vch Tin, that the Romans made their Ottadini, a word more amenable to their language.  All the English who lived against this wall were called MÆATÆ (as reported by Xiphilin after Dion), I think that our Ottadini were those who called the Caledonians to help them in this memorable English revolt.  It was then that the (Roman) Emperor Severe commanded his soldiers to put to the sword all the English using these verses from Homer:

That all are killed, down to the child still in its mother’s womb.

But the death of Severe, who arrived in Yorck (York) to prepare for this war, stopped the tempest.  For a long time after, this area seems to have been a part of Valentia, which Theodose thus named in honour of the Emperor Valentinian; because he had recaptured it from the hands of the Barbares (Barbarians?).  But in the Saon War, all thses names were abolished, & all the lands from there to the Humber, northwards, were names by a  Saxon term, the Kingdom of the Nordan humbriens.  It’s true that this title now has become Northumbrie & that is where we are now about to enter.

Northumbrie, commonly called North-umberland is triangular shaped.  The Derwent which flows into the Tin, & the Tine itself towards Dunelme froms the southern side.  The Germanic Ocean (North Sea) is to the East;  the West from the setting Hyver to the rissing Este has a chain of mountains, then the river Tweda (Tweed).  It overlooks Scotland & was the border of the Kingdoms, having two govenors in this county, one of the centre, the other for the extreme West.  As the land is rough, the inhabitants are hardy, & the proximity of the Scots has made them unsociable, as much by the wars in which they’ve been involved as by the contagion of their dead during peace times;  so that they are very valiant soldiers; also there isn’t one small fellow who hasn’t a tower in his house, or some place of defence.  The country is divided into Baronies, which are mostly quite puny; & up to the time of Edward I were called Gentlemen Barons.  What our ancestors did to honour the nobility at the Border & to pick even more at its defence.  But under Edward I this title was lost, only kept by those who were called to Parliament assimblies.  The side towards the & the Tine is more reported.  In several places coal is found – called sea-coales, & which is of great use to the people.

Towards the middle & west of the Hyver, the part called Hexamshire has, for a long time, been in the domain of the Bishops of York & is attributed – I don’t know under which title – the rights of the Palatinat.  But recently, having come under the King’s domain, by way of an exchange with Archbishop Robert, it was annexed to the County of Northumberland by the authority of Parliament, enjoying the same rights & depenfances of the Viscount of Norhumberland.

The Southern Tine (thus called by the Britons because it was narrow which they call ‘Tin’) flows from Cumberland near Alstenmore, where there is an old copper mine.  It passes through Lamble, fromer monastery of Nonains, founded by the Lucie family, & now almost demolished, carried away by deluges of water;  and at Fetherstan-Lough, house of the old & generous family of Fetherston : from where, going down to the Bellister castle, it turns east, following the wall, never more than 3000 feet away.

Leaving Cumberland & passing the Irthing stresam, the wall crosses the fast flowing river Poltross by means of a bridge with massive towers which seem to have been erected to ford the river.  Near there is Thirlwale castle, less remarkable for its grandeur than as the home for the illustrious Wade family & for the inroads that the Scots have made into this Province, the Irthing & the Tine proving no hindrance.  But you can learn better about this & the name of Iain Fordon’s place, a Scottish Historian, whose words I thought to quote here as his book is not available to everyone.

The Scots, who are on both sides of the wall, being victorious, began to inhabit these lands, haing dispossessed the farmers, made several opeinigs in the wall with various tools, & were able to go in & out when they wished.  Today this wall has taken its name from these holes: for in English it’s called Thirwall, that is to say “ThroughWall”.

Then comes Blenkensop which has given its name to a reknowned family & which used to be a part of the Barony of Nicolas Bolteby, in a quite pleasant countryside towards the south.  At Thirwall the wall is open, giving a way through to the fast flowing Tippal.  On the side & base of a hill, can be seen the traces of a Roman camp of 140 square feet.  The foundations of the houses & the streets are all obvious.

The neighbouring Gentlemen say that the military road, stone paved, goes through Maiden Castle in Stanemore: at least it goes to Kirkby Thor.

A kind old woman showd me an old altar cosecrated to a god Tutelaire Vitirineus.