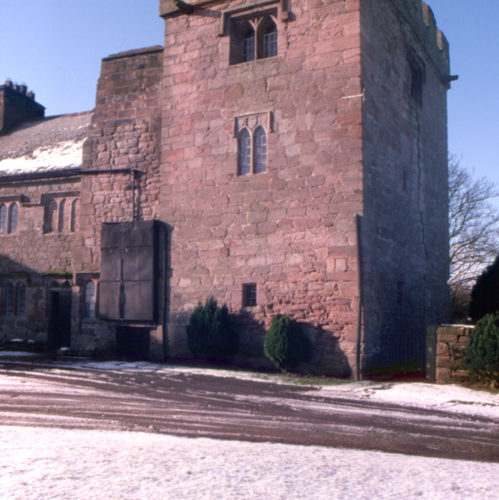 Catterlen Hall is a pele-tower of the late 15th century to which a hall range was added in the following century. It stands about two miles north-west of Penrith and ranks high in interest among the fortified houses of the Border. The well cared for buildings form a picturesque group and are still inhabited.

The pele-tower is small with relatively thin walls; only 3ft 6in thick. It rises two storeys above its vaulted basement from where a newel stair in the corner gives access to the floors above. The battlements are complete though these and the upper part of the tower are probably the result of restoration work.

The strong little pele-tower, despite its restorations, probably looks much the same as it did when William de Vaux built it. The arms of Vaux, in the form of six sheaves or “garbs” are carved on a spandrel of an upper window. Above the entrance to the hall is a heraldic panel with the initials of Roland Vaux and his wife Annie with the legend, “At thys time is Rolande Vaux Lorde of thys Place & builded thys Hall yr of God 1577”.