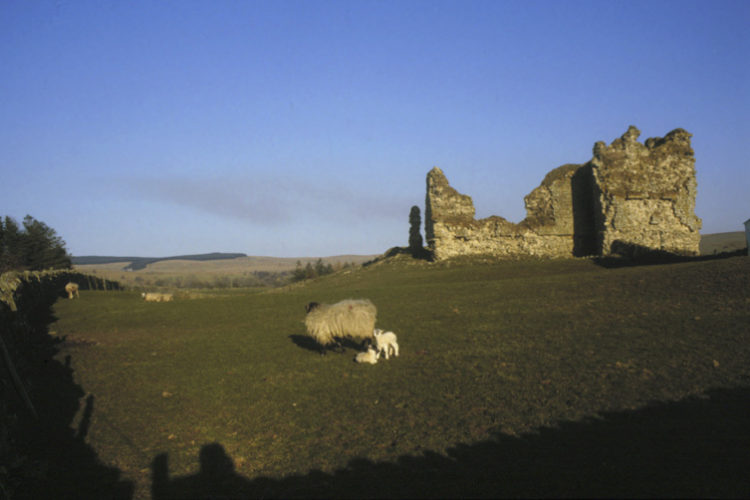 The ruins of Bewcastle stand on a mound in the north-east angle of a Roman fort. The earliest castle here was built in the 11th century and belonged to the Saxon Bueth after who it is named. The stone castle was probably begun in the 13th century though the barbican was added as late as the 16th century.

The large quadrangular keep of the castle has walls over six feet thick and is partly built of Roman stones. The castle is so badly broken down though that there is very little architectural detail to be seen now. There are traces of a gatehouse, barbican and of lean-to buildings that were built inside the courtyard.

Bewcastle guarded one of the main routes into the West March of England from Liddesdale, the lair of the Armstrongs and other notorious Reivers. Nevertheless it was allowed to decay – a survey of the castle made in 1565 records that the barmkin wall was “utterley decayed, the ditches filled with earth and mud , whereby men and cattle may pass in and fourth”. The estimated cost of repairs, £320, was evidently considered too high. The garrison of a hundred men was withdrawn to Carlisle and the castle was abandoned. Bewcastle is now an unstable ruin and in need of urgent consolidation if further wind, rain and ice damage are to be prevented. At present it is unsafe and public access is not recommended until the remains are stabilised and the site effectively managed.

Bewcastle area was notorious for the actions of border reivers and the retribution of the authorities.  An illustration of the usual fate of the Borderer in those days, who rarely died “like a cow” in his bed.  In the churchyard at Bewcastle there is an excess of the names of women over those of men on the headstones and when asked “What happened to the men”, the Sexton explained drily “Wey, the men were a’hangit at weary Carlisle!”  [see preface in book “The Lord Wardens of The Marches: Pease 1913]