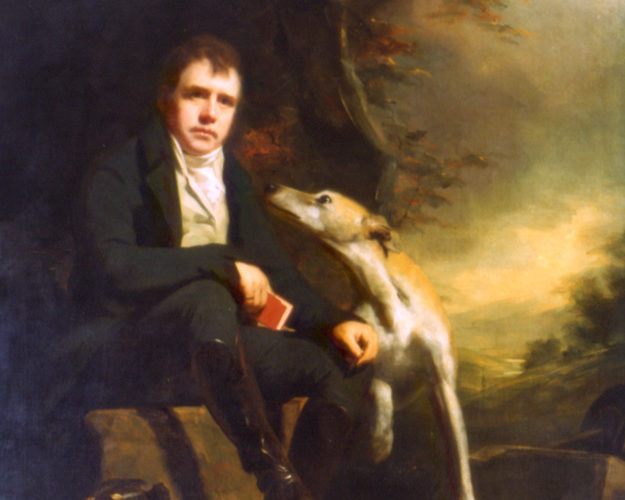 Had it not been for Scott’s collecting and reworking of many of the border ballads, much of the tradition, character and mythology of the Reiver story would be lost.

His biography is intimately linked with Carlisle and the border.

Sir Walter Scott was a novelist, poet and editor of Border ballads, whose prolific work has had an enormous influence on English literature and on Border themes down to our own day. Although often thought of as a Scottish writer, he was essentially a Border writer who had important personal links with Carlisle “The Great Border City”.

Walter Scott was born on 15 August 1771 in his father’s house in College Wynd, Edinburgh. He was one of five surviving children of Walter and Ann Scott. His father was a Writer to the Signet in Edinburgh, and his mother the daughter of a professor of medicine at Edinburgh University. From a childhood illness, Walter the younger developed a lameness in one leg which troubled him throughout his life.

In 1778 Scott went to the High School in Edinburgh, and while still at Edinburgh University began his apprenticeship in the law. He successfully passed his law exams and was called to the Scottish Bar on 11 June 1792. His literary interests had developed early. Formative influences at this time were his growing awareness of German literature from the learning of that language, and his reading of such English works as Dr. Thomas Percy’s Reliques of Ancient English Poetry, published in 1765. Dr. Thomas Percy had been Dean of Carlisle from 1778 to 1782, and was Bishop of Dromore in Ireland from 1782 until his death in 1811.

As a young man Walter Scott had met and fallen in love with Williamina Belsches, daughter of Sir John Stuart-Belsches and of Lady Jane, the daughter of the Earl of Level and Melville. However, this came to nothing when the young lady married another suitor in October 1796. In February 1797 Scott and some friends formed in Edinburgh a body of volunteer cavalry ready to serve anywhere in the country in the event of invasion, a scheme which was accepted by the government. It was called the Royal Edinburgh Volunteer Light Dragoons, and Walter Scott was appointed its paymaster and secretary.

After the rising of the Court of Session in July 1797, Walter Scott, his brother John and friend Adam Fergusson set out in August on a tour of the English lakes. He was encouraged in this by his friend Charles Kerr who had fallen under the spell of Lakeland scenery and taken a house in Keswick. They visited Carlisle, Penrith, the vale of Eamont, Mayburgh, Brougham Castle, Ullswater and Windermere. At about the end of August they stopped at Gilsland which was a popular spa with good accommodation and guest houses. From there they made trips into the surrounding area.

Riding out on one of these excursions Walter Scott and Adam Fergusson saw a young lady who was also staying at Gilsland. That same evening there was a ball next door at the Shaws Hotel which Walter Scott, his brother John and Adam Fergusson, and the young lady, attended. For the occasion John and Adam wore the scarlet uniforms of the Edinburgh Volunteers. Walter wished that he had brought his, but it was he nevertheless who took the young lady, Charlotte Carpenter, in to dinner.

Miss Carpenter was the daughter of Jean-Francois and Charlotte Charpentier of Lyons, both of whom had died by this time. On her father’s death her mother came to England in 1784 or 1785, when Charlotte was about 15. Her mother returned to France in 1786 and died there is 1788. Her children remained in England under the guardianship of the Marquis of Downshire. Through Lord Downshire’s influence, Charlotte’s brother, Charles Charpentier, received an appointment in the service of the East India Company in which he acquired in due course the lucrative post of commercial resident at Salem, Madras, India. Because of the war with France he took the step of changing his name from Charpentier to Carpenter, as did also his sister. The brother and sister had been baptised as members of the Church of England at St. George’s, Hanover Square, London. Charles Carpenter died in 1818.

Having earlier made a friendship that was judged inappropriate, Charlotte needed a change of scene and travelled to Cumberland with Miss Jane Nicolson, an older lady whom Lord Downshire had appointed to be her companion. Miss Nicolson was the daughter of Dr. Nicolson, Dean of Exeter, and granddaughter of Bishop William Nicolson who had been successively Archdeacon of Carlisle, Bishop of Carlisle, Bishop of Derry and Archbishop of Cashel. Her plan had been to stay with her cousin the Rev. John Bird, Perpetual Curate of St. Mary’s, Carlisle, and his wife. However, when she discovered that Mr. & Mrs. Bird were about to stay at Gilsland, it was decided that Miss Nicolson and Miss Carpenter would join them there. Mrs. Bird soon discovered that she and the Scotts had friends in common, and as Walter’s uncle, Dr. Rutherford, and his wife were also at Gilsland and met the Birds and Miss Nicolson, there were reassurances all round that the quickly developing friendship between Walter and Charlotte could be approved.

Having met the young lady, Walter Scott’s thoughts quickly turned to marriage. She not only had a sweet and cheerful disposition, but also, as he informed his mother by letter, “her fortune, though partly dependent upon her brother, who is in high office in Madras, is very considerable – at present £500 a year”. Scott seems to have created a good impression upon Miss Carpenter but she insisted that Scott must obtain his parents’ approval, and she would not marry without Lord Downshire’s consent. She also insisted that he must not follow them back to Carlisle, so he went to Cockermouth and wrote to his father from there.

Scott remained in Cumberland until the Jedburgh assizes called him back to work in September 1797. However he was soon back in Carlisle where he wrote to his father in Edinburgh on 4 October. He reports that he had had a letter from Lord Downshire only an hour before, asking that Scott’s father should write to him. Lord Downshire readily gave his consent to the marriage. Walter Scott’s father, however, was initially prejudiced against Miss Carpenter, partly because of her French nationality and partly because of uncertainties about the security of her income, which depended upon an annuity from her brother in India. However, these anxieties were set at rest, and Scott’s father set off forthwith for an eight day visit to Carlisle.

A string of letters written by Charlotte Carpenter in Carlisle to Walter Scott in Edinburgh has survived. Dated 22, 25, 26, 31 October, 4, 14, 27 November and 10 and 14 December, they reveal the progressive development of the relationship and the overcoming of difficulties of various kinds. Walter Scott and Charlotte Carpenter were married in St. Mary’s, Carlisle, which was the truncated nave of the Cathedral, on 24 December 1797. The names of John Wise and Jane Nicolson, now more fully explained, appear on the marriage certificate. It seems that neither Walter Scott’s parents nor Lord Downshire were present, which suggests either that some difficulties remained or the speed with which the marriage was made prevented them from being there.

The house in which Charlotte Carpenter stayed in Carlisle and from which she was married was 5 Abbey Street. A plaque on the house reads, “Sir Walter Scott was married from this house, Decr. 24th. 1797.” It is now the upper part of Johnson’s the Cleaners. The house belonged to Richard Cust (1754-1844) who was a London stationer. He was a distant cousin of William Wordsworth, in that his first cousin, Charlotte Cust, married Christopher Crackenthorpe Cookson whose sister Anne, was Worthsworth’s mother. . A portrait of Charlotte Carpenter at this time, in the possession of Mrs. Maxwell-Scott, is illustrated in David Daiches book Sir Walter Scott and his World. There are many portraits of Scott, some of them very well known.

It seems that Scott often found occasion to return to the Cathedral, for his daughter was to write in 1828,
“Early in the morning before we started, papa took me with him to the Cathedral. This he had often done before; but he said he must stand once more on the spot where he married poor mamma.”
She had died on 15 May 1826.

Of his various trips into Cumberland and Westmorland, we know that he visited with his wife in 1805, when William Wordsworth travelled with them. This trip included visits to Gilsland and Carlisle. In 1815 Scott visited Corby Castle. In 1825 he visited Storrs Hall, Windermere, with Canning, Wordsworth and Professor Wilson. Afterwards he visited Wordsworth at Rydal Mount, Southey at Greta Hall, the Marshalls at Ullswater and Lord Lonsdale at Lowther. In 1831 he included the Giant’s Grave in Penrith churchyard in his visit. He died the following year.

Scott’s work, The Border Antiquities of England and Scotland, published in 1814, reveals his definition of the Border country. The considerable space devoted to the English side of the national boundary, not least to the city of Carlisle, shows how even-handed he was ready to be. Carlisle clearly fascinated him, and it features in a number of his novels, including Waverley (1814), Redgauntlet (1824), and Chronicles of the Canongate (1827).

There is no doubt that Scott could have had a distinguished legal career had he so wished. However his success as a writer, poet, and collector and editor of Border ballads meant that his greatest achievement lay in that direction.

Sir Walter Scott died on 21 September 1832 at Abbotsford, surviving his wife by six years. Honoured by the very high regard in which he was held as a novelist, poet, collector of ballads and as a Border laird, and by the conferring upon him of a baronetcy, he lived out his last years burdened by enormous debts. These were incurred after the collapse of the businesses of his partners, Constable the publisher and James Ballentyne the printer of the Waverley novels. The success of the novels had lured them into a false sense of financial security, their lack of business acumen meant that they failed to run the business profitably, and Scott had spent vastly more on Abbotsford in extending the house and the estate than even his substantial earnings could support. In 1825 he became personally responsible for a debt of about £130,000, and he undermined his strength in his lasts years writing to clear the debt. However, the judgement of history has been kind to Scott. His enormous contribution to the development of English literature, especially the historical novel is very generally acknowledged. His work in preserving Border ballads is much acclaimed. Film versions of Ivanhoe and Rob Roy have introduced Scott to a new age and a new culture. Scott is a romantic figure within a romantic landscape with a rich romantic talent. It is a blend that is not easily forgotten.

As the Border city, Carlisle had a powerful attraction for Scott, and it is no surprise that it features in the novels he wrote and in the ballads he collected. Its Castle, Cathedral and the events of its turbulent history all appealed to him as an historian and as a romantic. Add to this the personal links of Sir Walter Scott and his wife Charlotte to the city through their courtship and marriage, and subsequent visits, and the strength of the Scott connection with Carlisle is very clear.