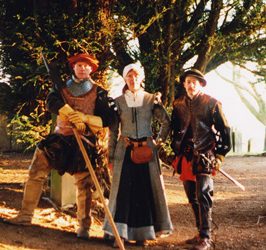 WITH the union of the two crowns in the person of James vi. and i. the golden time of the Rank-rider of the Marches, the Border Freebooter, and the Moss-trooper came to an end. He was forced to ‘ purge himself and live cleanly/ for he could no longer play upon the mutual jealousies of the Wardens nor ‘take assurance’ from the opposite realm, but was punished for his misdeeds by Commissioners or by the Judges on their Assize.

All hostile Acts of Parliament against each other’s realm were deleted in 1607, and either country sought the common security ; but it was only gradually that the Borders were quieted. Wanton destruction indeed such as had formerly been caused by the Wardens ceased, but ‘ doing a little shifting for their living ‘ was still a profession amongst the marchmen, and the horse-stealer lingered on into the reign of George i., for we hear of a noted horse-thief, ‘ Luck-in-the-bag,’ in connection with the rising of ‘ the ’15.’

The profession, however, lost caste, and offenders were dealt with hardly, being pursued by ‘ slough- dogs ‘ (bloodhounds) through the sloughs, mosses and bogs, ‘ and thus in 1616 Sir Wilfrid Lawson and Sir Wm. Hutton, two of his Majesty’s commissioners for the government of the middle shires of Great Britain, send salutations to John Musgrave the provost Marshall and the rest of his majesty’s garrison (of Carlisle),’ and order ‘ watches to be duly searched as was appointed and presentments to us or one of us to be made, of every fault, either in constables for their neglect in not setting it forth, or in any persons slipping or neglecting their duties therein ; and that you likewise see that slough dogs be provided according to our former directions, and as this note to this warrant annexed particularly sets down.’ The first ‘ dogge ‘ is to be kept beyond Esk, and other eight are also to be provided and their quarters named ‘ the Sheriff, officers, l^ailiffs and constables, within every circuit and compass wherein the slough dogs are appointed to be kept, are to take care for taxing the inhabitants towards the charge thereof, and collect the same, and for providing the slough dogs ; and to inform the Commissioners if any refuse to pay their contributions, so as thereby such as refuse may be committed to the gaol till they pay the same.’ Various commissions were appointed, composed of both English and Scots, whose ‘ condescendings ‘ dealt with offenders of either country. Thus Englishmen refusing to staunch old feuds were to lie in Edinburgh, and Scottishmen in Newcastle. Armour and weapons in the unsettled districts in the Middle and West Marches were to be put away, and no horse, gelding or mare above the price of 50s. sterling or 30 Scots was to be kept upon pain of death. Wp228

In the case of the Grahams or Grames, who lived beside Esk and Liddle in the English part of what had been till its division in 1552 the Debatable ground, a ‘ transplantation ‘ of almost the entire ‘ name ‘ was effected early in the new reign.

As the King proudly declares in his proclamation of the first year of his reign, December 1603, ‘ By the travel of his cousin, the Earl of Cumberland, his lieutenant there, with the assistance of other commissioners, things are brought to that point, that the offenders are all at our mercy, and do all (but specially the Grames) confess themselves to be no meet persons to live in those countries, and therefore have humbly besought us that they might be removed to some other parts, where with our gracious favour they hope to live to become new men, and to deserve our mercy : although we do confess, we have rather inclined to this course of mercy, as a thing more agreeable to our nature, than the taking of so much blood as would be shed, if we should leave them to the just censure of the law.’

Nevertheless His Majesty has to admit concealing as best he may this hard fact under much verbiage that there being ‘ a lack of means to provide presently for the transplantation of these Grames elsewhere, to the intent their lands may be inhabited by others of good and honest conversation : we have thought it not amiss, for better effecting thereof, and for ease of the prisons, to dismiss the vulgar sort of them : retaining their heads and principals for pledges, not only to be answerable for their forthcoming when they shall be called for, but for their good behaviour also in the mean season.’

Mr. Bell, the west Warden’s clerk, gives in his MS. ‘a note and abstract of the several names of the clans of all the Grames, severally given in to the right honourable Thos. Lord Scroope of Bolton, Lord Warden of the West Marches of England towards Scotland, preferred by them the eighth day of Oct. 1602 ; whom they severally bound themselves to be answerable for to the said Lord Scroope.’ Commencing with the Goodman of Netherby, who answers for himself, sons, brothers, ‘ brether,’ and tenants, and concluding with those that ‘ Will Grame, Goodman of Medop, his eames [uncles] sons, and friends will answer for the number is four hundred and thirty-nine, and ‘the tax assessed and received for transplantation of the Grames in the year 1606 ‘ is set down at 408, 19s. 9d., paid not by King James or Scotland, but by a rate upon the counties of Cumberland and Westmoreland.

He gives the disbursements of the three ‘ goings over of the Grames into Ireland,’ and it is abundantly evident from the meek manner in which these hardy Borderers submitted that in King James’s ‘ Middle Shires ‘ ‘ Othello’s occupation was gone.

The sword was not always beaten into the ploughshare, for the Border country remained largely pastoral ; but the lance of the notorious ‘ Geordie Bourne ‘ of the Marches became not infrequently the pick of Geordie Pitman who to this day exhibits the courage and hardihood that characterised his fore- elders through the centuries of Border warfare till in his wisdom King James vi. and I. ‘ thought good to discontinue the divided name of England and Scotland out of his royal style, and resolved to take and assume the name and style of Great Britain.’ Wp229

Ref: From The Lord Wardens Of The Marches Of England And Scotland by Howard Pease.  Limited to 500 copies.  Published 1912.