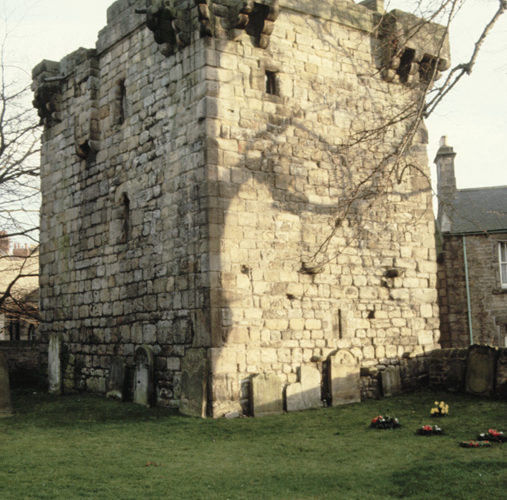 Generalities, description and cut-away drawing of a Pele, Peel or Pele-Tower by Pete Armstrong

Pele is derived from “pel” an Old French word for a stake. In early times many fortifications were constructed from wooden stakes or “piles”. These fortified enclosures were called “peles” but the term later acquired a wide range of meaning and was used for a tower or almost any defensible structure.

The term “Pele-Tower” is specific and means a fortified tower of the English Borderlands where the accommodation, for defensive purposes is arranged vertically rather than horizontally. A “Tower-House” is the term used for a similar stronghold on the Scottish side of the Border.

Pele-towers, though they vary quite widely, do have several common elements that distinguish them as such. A typical pele-tower was almost square on plan and rose to three or four storeys with walls up to ten feet thick. There was generally a barmkin or enclosed courtyard with outbuildings within this.

The ground floor of the tower had a stone barrel vault and was used as a store, it was not a refuge for livestock, this was the function of the barmkin. There was a doorway into the vaulted basement often guarded by a heavy oak door and an iron “Yett”. The basement was windowless and lit only by narrow ventilation slits. In a corner, in the thickness of the wall, rose a narrow newel-stair which spiralled upwards to give access to the floors above terminating in a cap-house.

Pele-towers had a single room on each floor lit by small barred windows though these were often replaced in later more secure times by larger mullioned windows. The wall-head was often provided with a crenelated parapet and a

narrow wall-walk drained by spouts which threw rain water clear of the walls. There was seldom room on the wall head to consider it a fighting platform, it was really a look-out post.

Roofs were pitched and covered with slate; the gables were often set inside the wall-walk and the roof space provided a garret or attic storey above the wall-head.

The problems of nomenclature are illustrated by a letter of 1528 from Lord Dacre to Wolsey describing a “strong pele of Ill Will Armistraunges, builded aftur sich a manner that it couth not be brynt ne distroyed, unto it was cut downe with axes”. It seems that “pele” here is used of a timber building.