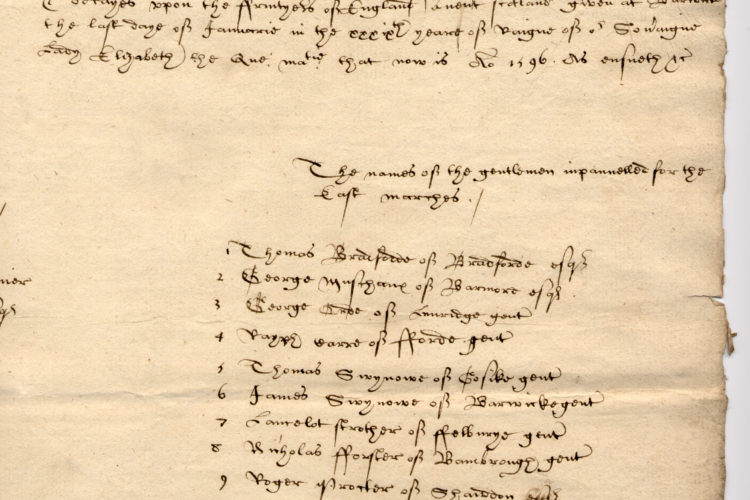 Pacification of The Borders The Pennington Archive

Cumbria: The West March of England. Cumberland and Westmorland

The Warden of the West March of England was based in Naworth Castle, where the “capon tree” still has the folklore of being where the reiver had their cap removed before hanging them from the tree.  Eventually when James VI of Scotland became James I of England and united the kingdoms, a process of “pacification of the border” commenced but the pacification was a violent and arbitrary affair.  100 Grahams were locked in a dungeon until they could be expelled to Ireland, more expelled to the continent where they conned their way back to Britain by claiming that one of them was the captain and had forgiven the others in his care.  The stories seem to be fiction but fortunately you can read transcripts of the original official documents which were copied between the various authorities who were charged with “pacifying” the border.

Muncaster Castle was the residence of one of those charged with pacifying and their Pennington Archive is held at Whitehaven Archives.   View the Pennington Archive original documents here. Cumbria Archives office at Carlisle have a partial transcript of the medieval feint handwritten script that can be viewed here.

Cumbria Archives office at Carlisle have a partial transcript of the medieval feint handwritten script that can be viewed here.

The scans below are from the Muncaster Archive, also called the Pennington papers, which is stored at Whitehaven Records Office, Cumbria.  The filenames relate to the folio page numbers that were scanned. One page relates to correspondence with Howard in 1637 which was outside the period I was investigating but which refers to sheep stealing.  The Curwen images are from a separate document also kept at Whitehaven.

The HMS Commission Calendar of Border Papers transcribed part of the folios, but not all writing has been transcribed.

Text from the Historical Manuscripts Commission

“A folio volume in a parchment cover, fastened with an ancient. clasp. It contains copies of letters and other documents relating to the Commission appointed by James I. for the pacification and government of the borderland of his two kingdoms. They are all in one small, neat hand, and almost in chronological order. There is reason to believe that they were made for Joseph Pennington of Muncaster, one of the Commissioners, from originals in the possession of Sir Wilfred Lawson, the most active of his colleagues, and the custodian of their papers. The name of Graham is generally given as Grayme, and Grey as Gray, but in the following calendar I have modernised these and most other proper names.”

After the death of Elizabeth I, James VI of Scotland became James I of England and arrived in London in 1603 to make arrangements with Scottish courtiers and the English privy chamber.  The Scotsmen became the focus for patronage networks stretching from Whitehall, through the privy council in Edinburgh, to the Scottish regional elites, and helped James retain the co-operation of those elites.

Against the background of attempts to gain fuller union, James sought to demonstrate the benefits of regal union by prosecuting a pacification of crime within the Scottish and English Borders.  The Marches were now rechristened the Middle Shires. Patronage networks from Whitehall to Roxburghshire secured the co-operation of the Scottish Borders elite, whilst acting as conduits for information and advice back to Whitehall. These relationships were integral to Scottish governmental processes in James’s absence, providing a much-needed cohesive force within his fragile new multiple monarchy.

The Pacification Documents in this website record some troubles and the remedies in 1600s .  The documents should be transcribed and made public.  Could you be the first to transcribe these documents that have never been read in modern language?

Click on a thumbnail of the folio then right click to save the document to your computer to transcribe and then send please the transcription back to this site.

Ref: Abbreviated from Groundwater A: Patronage networks and the government of the Scottish Borders 1603 – 1625  The Historical Journal,