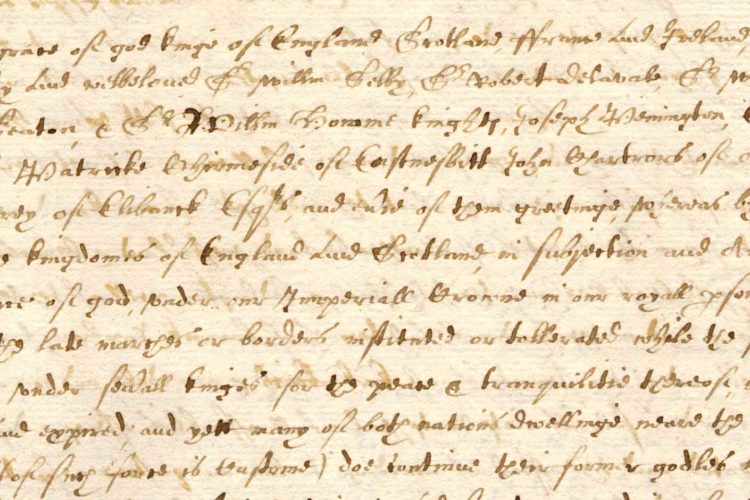 King James VI of Scotland and I of England abolishes the Marches and establishes a Commission of Scottish and English to pacify the borders.

The Border Reivers had ignored the laws of Scotland and England and even ignored the Leges Marchiarum that were designed to suit their situation. Skirmishes and thieving had made the borders a lawless place. King James saw no need for a border, nor for the Wardens of the Marches so they were abolished.

King James ordered that the borders should be pacified and so lands were confiscated, whole settlements cleared of their population and sent as settlers to Ireland or soldiers to the Lowlands. The Grahams were singled out for special measures since they and the Armstrongs had played against both England and Scotland.

After the death of Elizabeth I, James VI of Scotland became James I of England and arrived in London in 1603 to make arrangements with Scottish courtiers and the English privy chamber.  The Scotsmen became the focus for patronage networks stretching from Whitehall, through the privy council in Edinburgh, to the Scottish regional elites, and helped James retain the co-operation of those elites.

Against the background of attempts to gain fuller union, James sought to demonstrate the benefits of regal union by prosecuting a pacification of crime within the Scottish and English Borders.  The Marches were now rechristened the Middle Shires. Patronage networks from Whitehall to Roxburghshire secured the co-operation of the Scottish Borders elite, whilst acting as conduits for information and advice back to Whitehall. These relationships were integral to Scottish governmental processes in James’s absence, providing a much-needed cohesive force within his fragile new multiple monarchy.

The Pacification Documents in this website record some troubles and the remedies in 1600s .

Transcription of Instructions from King James 1605

f.1. [February 25, 1605.] The King to Sir William Selby, Sir Robert Delaval, Sir Wilfred Lawson, Sir William Seaton, and Sir William Home, knights, Joseph Pennington, Edward Grey of Morpeth, Patrick Chirmeside of East Nisbit, John Charteris (Chartrows) of Amesfield, and Gideon Murray of Elibank, esquires. Commission for the speedy suppressing of offenders in the counties of Northumberland, Westmoreland and Cumberland, and in the shires and parishes of Norham, the Holy Island, and Bedlington, parcel of the county palatine of Durham, and in the shiredoms and towns of Berwick, Roxburgh, Selkirk, Peebles, Dumfries, and in the stewardries of Kircudbright and Annerdale. (Printed in Rymer’s Foedera.)

The transcription was made by the Historical Manuscripts Commission and the copyright has been released into the public domain by instruction of the government.  The folios are in the Pennington Archive in the care of Whitehaven Records Office.

The page has not been fully transcribed so please download a larger copy, transcribe it and send your transcription via the comments section below.

Pacification of The Borders – The Pennington Archive

Pacification of The Borders The Pennington Archive Cumbria: The West March of England. Cumberland and…