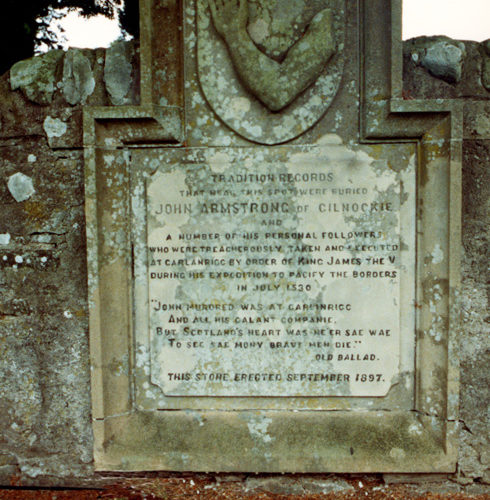 Memorial to Johnnie Armstrong and his men at Carlenrig, Teviothead, Roxburghshire, Scottish Borders

Carlenrig is high in Teviotdale; the churchyard there is reputed to be the burial place of the most famous of Border Reivers; Johnnie Armstrong the Laird of Gilnockie also known as ‘Black Jock’. He and 36 of his henchmen were hanged without trial at this spot in 1530 on the orders of 18 year old King James V.

The memorial stone in the churchyard at Carlenrig was erected in 1897, the lines inscribed on it express a romantic regret for Johnnie’s passing. “John murdered was at Carlenrigg, And all his gallant companie, But Scotland’s heart was ne’er sae wae, To see sae mony brave men die.”

In 1530 James V came down to the Borders with the intention of pacifying them. He may have lured Black Jock and his men to Carlenrig with the promise of a pardon for their depredations. Whatever the truth, and there is little real evidence to go on, the final words attributed to Johnnie Armstrong have a proudly defiant ring to them;

“I am but a fool to seek grace at a graceless face. But had I know, sir, that you would have taken my life this day, I should have lived on the Borders in spite of King Harry and you both, for I know King Harry would down-weigh my best horse with gold to know that I were condemned to die this day.”

The official record merely records the grim facts. “John Armestrange, alias Blak Jok and Thomas his brother convicted of common theft etc.- Hanged.” Of the circumstances surrounding this incident, Sir Herbert Maxwell says that there is not a shred of documentary or other evidence in support of it, and that it “is just the sort of story that would gain currency and credence in a district where half the inhabitants were moss troopers and half of the rest in league with them”.