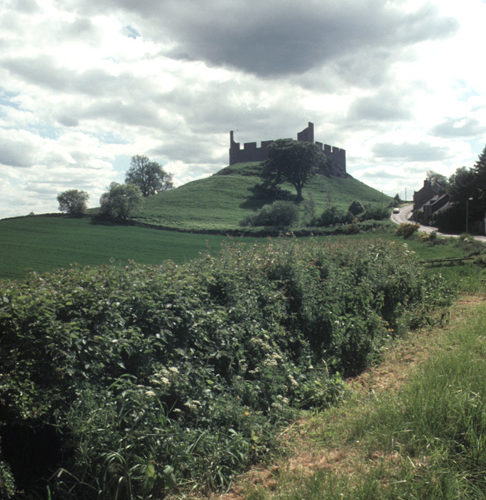 The prominent and striking outline of Hume Castle is visible for miles around, it dominates the flat landscape of the Merse, though it is in reality a sham. The existing building dates from 1794 when the Earl of Marchmont built this folly on the foundations of the old castle of the powerful Hume family of the East March.

Few fragments survive of the ancient stronghold which was built in the 13th century and was the chief stronghold of the Merse. The Hume family had a stranglehold on the Office of Warden of the East March of Scotland and held sway over the affairs of the March much as their castle dominated the Merse.

In 1545 the old fortress was still strong enough to withstand the Earl of Hertford who, despite Henry VIII’s orders, failed to take Hume Castle during his destructive raid on the Scottish Borders that year. In 1570 the castle, despite being strongly held by a garrison of two hundred men, fell to the Earl of Sussex after a brief artillery bombardment and remained in English hands until 1573. The old stronghold was finally demolished by Oliver Cromwell in 1651.