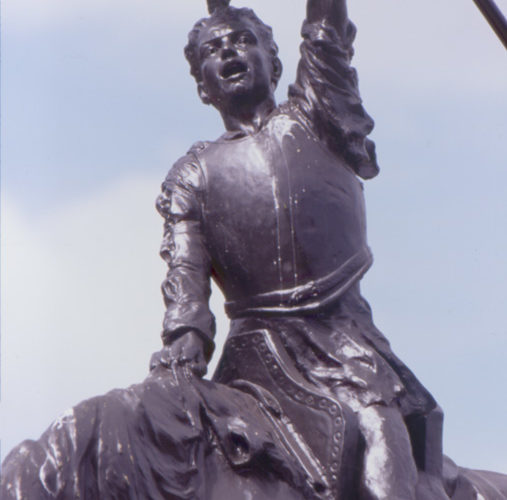 Equestrian Statue known as “The Horse” in Hawick, Roxburghshire

The equestrian monument on an island in Hawick’s busy main street is known locally as “The Horse”. The monument is by the Edinburgh sculptor William F. Beattie who was born in Hawick. The equestrian bronze was unveiled in 1914, four hundred years after the skirmish of Hornshole which it commemorates.

William Beattie’s original plaster maquette of the monument, submitted in 1913, can be seen in Hawick Museum. Sculpted in a historical realist style and reiterating the sentiment of Clapperton’s “Spirit of the Border” in Galashiels, Beattie’s gallant hero symbolises the indomitable fighting spirit of the Borders.

The text of the inscription on the stone plinth reads;

“Erected to commemorate the return of Hawick gallants from Hornshole in 1514 when after the Battle of Flodden they routed the English Marauders and captured their flag.”

The Battle of Flodden in 1513 had been a disaster for the Scots and was no fit event to commemorate with heroic sculpture.

The rather less well known victory at Hornshole seemed a more appropriate subject to the patriotic citizens of Hawick in the early years of the 20th century.

The flag taken was apparently that of Hexham Abbey. The statue is decorated with ribbons to this day on the Thursday of the “Common Riding” to celebrate the victory of those Hawick Gallants of long ago.