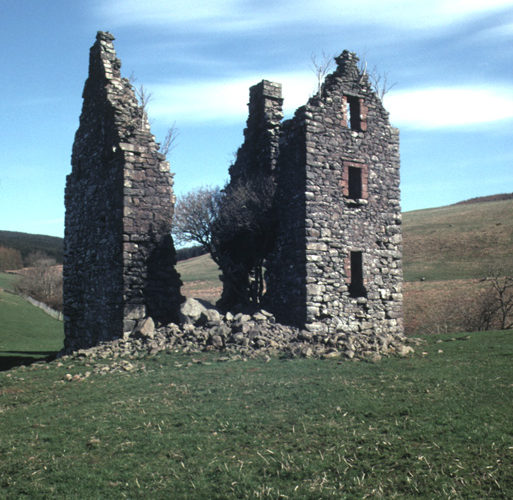 Frenchland Tower stands beside the steep gully of the Frenchland Burn above Moffat in Annandale and commands an extensive view over the valley and the town. The tower is ruined and some of the side walls have fallen leaving the upper parts of the gables rather precariously poised now.

The tower was originally an oblong onto which a new stair and accommodation wing was built, possibly in the 17th century. At this time the roof was altered to a simple pitched roof and the floor levels were changed. There is no indication that the tower was ever vaulted.

The wide scale-and-platt stair in the new stair-wing only rose as far as the second floor, from there the upper storey was accessed by means of the old newel stair. The upper levels of the stair-wing were used as accommodation. Remains of the well of the old newel-stair can be seen in the corner of the main block. At the level of the old wall-head can be seen several corbels that, before alterations to the roof-line, may have supported a corner turret.