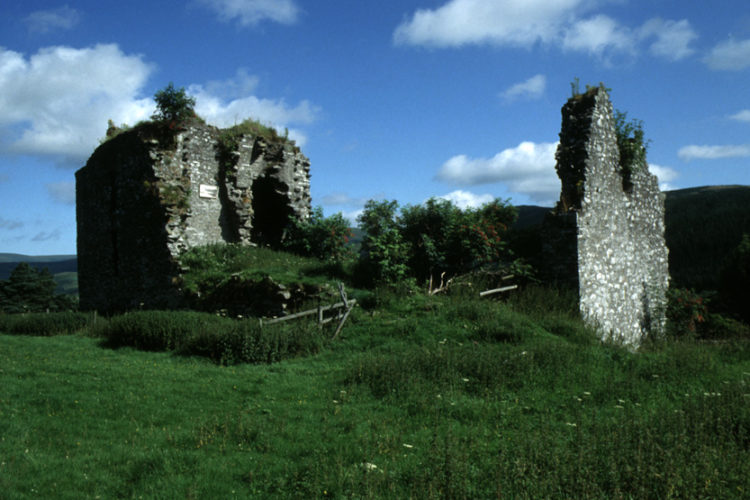 Elibank was formerly known as Eliburn and overlooks the River Tweed from a commanding position high on its steep right bank. The late 16th century fortress is rudely built without any dressings and comprises an oblong main-block, with a square wing attached to the east corner. The remains are in a dilapidated state.

In 1511 Elibank, or Eliburn as it was then, was in the hands of the Liddale family. However the ruined building that we see today was probably built by Sir Gideon Murray of Glenpoit who acquired Elibank from John Liddell of Halkerstone in 1594-5. The castle was already a ruin in 1722.

Elibank is reputed to be the home of “Muckle Mouth Meg”. In the waning years of the 16th century, the Laird of Eliburn despaired of finding his daughter Meg a husband as she was no beauty and was not called “muckle mouth” without reason.

One moonless night towards the turn of the old year the laird and his household were alerted by cries and a shot from the darkness beyond the castle. The laird, careful of his cattle and goods, and being no stranger to the ways of Reivers himself, kept a watch who had surprised a band of rogues that had forced a way into his barnekin and were attempting to drive off his livestock. In the ensuing confusion the laird’s men captured one of the thieves and flung him into the dank dungeon below the castle floor. In the morning the prisoner was brought before the laird, who evidently thought the lad worthwhile, and offered him a choice. He could hang or he could marry Meg.

Horrified at the prospect of marrying Meg, for her fame was widespread, the lad chose the gallows. Meg’s father was not to be cheated of a husband for his daughter however, so he returned the unwilling suitor to the evil prison cell to reconsider. The lad, who it turned out, was Walter Scott from nearby Ettrick eventually reconsidered his choice and he and Meg were married. Surprisingly enough it seems that he and Muckle Mouth Meg got along well, she mellowed and he settled down and the marriage was something of a success in the end.