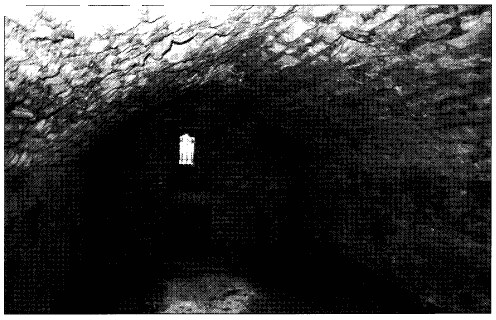 The Curwens have been listed among the reiving families of the 16th century, and records show how forces were raised and armed to fight against the Scots.

The Feudal Tenancy was based on Military Service. Each household providing an armed man or men, numbers or type of fighting man, depending on the value of the land holding. The peasant farmer was required to provide a man armed with helmet, spear and dagger. A holding to the value of 16 marks (a mark being 13 shillings and fourpence), produced an archer, and so on up to the Lords of the Manor, who in addition to providing themselves in full armour, provided numbers of men according to the value of their estates.

Thus in records of 1543 we find the following:

William Curwen Horse at his pleasure

The value of the Curwen estate at this time would provide for up to 120 horse or cavalry and “at his pleasure” would appear to mean that he operated his force as an independent command. The Curwen’s main defences, as a coastal family, would appear to have been concerned with raids across the Solway.

The Curwens also took part in raids into Scotland. In 1547 a large raid netted 192 Scottish villages burnt … 403 Scots killed … 12,900 sheep rustled … and 1,300 horses taken. It was in this raid that the Curwens ‘threw down Carlaverock Castle’ and sailed back to Workington with the Iron Gates of the Castle, which were used as the entrance to the Hall up to the present century.

Prior to the raid of 1570, which took place under the banners of the Earl of Sussex and Lord Scrope (the Warden of the West March and Scotland’s hated enemy), on the 22nd August of that year, Henry Curwen and a Simon Musgrave received the Accolade of Knighthood. That raid saw 1,000 cattle and 1,000 sheep rustled. The official despatch after the raid stated … “That they had not left a stone house standing capable of giving shelter to armed men.

There have never been any purpose-built dungeons at the Hall, but the three ‘cellars’ added to the Barbican in 1404 saw the central one in use as a jail. In the 15th century, the ground floor of the Pele Tower became the site of the Manor Court or Justices Hall as it is shown on the maps.

The Curwens, as Lords of the Manor, held all jurisdiction for the area, with powers to fine or imprison wrongdoers. In the 16th century, the jail was also used to hold prisoners brought back from raids across the border to await the fulfilment and payment of their ransom. It became a dungeon, or achieved the status of one in 1606 when over a 100 prisoners were squeezed in that small space.

The interior of the dungeon is attached.

James the 1st of England and 6th of Scotland attempted to bring peace to the Borderlands by rounding up and transporting to Ireland, the worst of the Border Reivers, namely, the Elliots and Grahams. Approximately 300 were rounded up and the males were sent to serve in the British Army then fighting in the Netherlands. A large number escaped and deserted and a second rounding up saw 22 being hung, with families including women and children, herded to Workington to be held until shipment to the wastes of Roscommon in Northern Ireland. Records mention 50 families and 24 names.

This was November 1606, and because of the time of year and the onset of winter, it was deemed that ‘Pregnant women and Children’ be held back in the dungeon to be transported the following year.

As James the 1st stated in his Edict, ‘either obey the laws of England or get out’. The worst of the Scottish Reivers, the notorious Grahams and Elliots, were literally, thrown out.

Archive summary says:
The document relating to: Return of Commissioners for redress of grievances and disorders on the East and Middle Marches 1596 is part of the miscellaneous section of the Curwen Family records which are held in the Whitehaven Records Office of Cumbria Archives.

The Curwens of Workingon Hall represent one of the oldest families in England, the male line being descended from Eldred, a pre-Norman Englishman. The Curwens never attained national importance on politics or the church nor did they accumulate massive wealth.

Workington Hall, sometimes called Curwen Hall, is a ruined Grade I listed building on the outskirts of Workington in Cumbria. The present building dates back to around 1404 and was built as a fortified tower house however a 14th century peel tower originally stood on the site. In 1568, Mary Queen of Scots stayed at the Hall for a few days before being moved to Carlisle Castle and into life-long imprisonment.

The War Office requisitioned the hall at the outbreak of WWII and it suffered a very serious fire while troops were billeted. At the war’s end, the owners passed the hall in a now much damaged condition over to Workington Borough Council who proposed to restore it and use it as a Town Hall but this never came to fruition and it became a classified ruin. English Heritage and Allerdale Borough Council, the Workington Heritage Group and Friends of Workington Hall Parklands are seeking to carry out the necessary restoration work to make the Hall safe for public access to the areas directly surrounding the building.