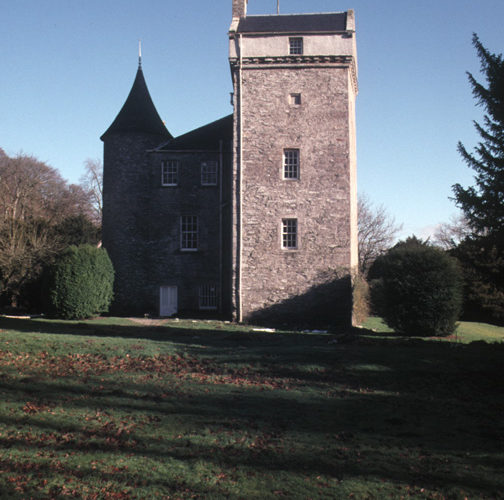 Branxholm is situated about three miles west of Hawick on a bend in the river Teviot. It was once the main stronghold of the great and warlike family of Scott of Buccleuch. The original castle was extensive; it had four towers that stood at the corners of an enclosed courtyard but today only one of these survives.

The tall L-shaped tower at Branxholm is of the 16th century and rises to five storeys. Above the wall-head the tower has been altered by building gables and walls onto the corbelling that previously supported the parapet, then roofing over the resulting structure. Several of the original windows have been filled in.

The lands of Branxholm were acquired by the Scotts in 1420 and as the power of the Buccleuchs increased so did the size of their castle. It dominated a wide area and was the key to the pass between the Tweed basin and Cumberland.

The Bard of Abbotsford has described how “Nine-and-twenty knights of fame hung their shields in Branxholm Hall”, and from here many a bold foray spurred for the Border on errands of plunder and vengeance.

The old tower doorway was removed during alterations in 1790 and inserted into the new wing; above this are the arms of Scott and Douglas.

In 1544 the castle comprised merely a tower and barmkin.

This was destroyed by the English under the Earl of Sussex in 1570 and restoration work which resulted in the courtyard castle was begun by Sir Walter Scott the following year. It was completed by his widow in 1576.

The base of a second tower of the courtyard castle called Tentyfoot Tower is still visible to the north of the existing buildings.

As well as Sussex’s “dinging doun”, which he achieved with the aid of gunpowder, the castle was burned by the Earl of Northumberland in 1532.

Branxholm is inhabited to this day and is still in the hands of the Buccleuch family.

This location can also be found with the spelling “Branxholme”.

This work is licensed under a Creative Commons Attribution-NonCommercial-ShareAlike 4.0 International License
Back To Top
×Close search
Search