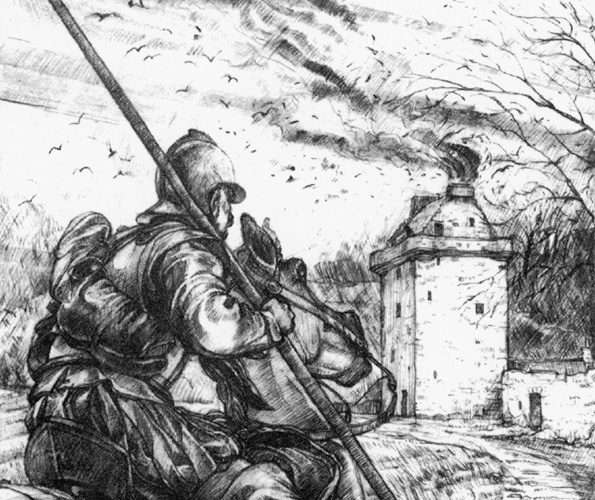 England and Scotland were afraid of invasion from each other. Both countries were also troubled by raiding Reivers who would steal goods, kill or abduct people and destroy property.  Search for Outrage and Complaint to see the fear and watchfulness of border people.

Laws were passed which required that fords and passes were watched so the watchers could warn of approaching trouble. These watches were set along the English Border between Berwick and Carlisle, but the Scottish watch extended into Annandale, even as far west as Gallow Hill in Moffat parish.

The watchers would have a bell and a beacon to warn their neighbours if there was trouble, and the neighbour would similarly light their beacon. We can imagine a dark night with flickering points of firelight in the distance that warn of impending trouble.

It became the law that you had to have your beacon lit.

In 1570 an order was issued to the Wardens of the East and Middle Marches of England by the Earl of Sussex, Lord President of the Council of the North, as follows:

‘Everie man that hath a castle or a tower of stone shall, upon everie fray raysed in the night, give warning to the countrie by fire in the topps of the castle or tower in such sort as he shal be directed from his warning castle, upon paine of 3s. 4d.’

The Beacon in the Firepan to be keeped and never faill burning, so long as the Englishmen remain in Scotland; and with ane Bell to be on the Head of the Firepan, which shall ring whenever the Fray is, or that the watchman seeing the thieves disobedient come over the water of Annand, or thereabout, and knowes them to be enemies: and whosoever bydes fra the Fray, or turns again so long as the Beaken burns, or the Bell rings, shall be holden as Partakers to the enemies, and used as Traitors to the Head Burgh of the Shyre, upon the Court day, and there¬after intimation made in the Parish Kirk, and published on ane Sunday, in presence of the People, and fra thenceforth to be used as a fugitive, and disobedient Person.

Which roughly translates as:
As long as Englishmen remain in Scotland or any thieves are in the area, then the beacon fires shall burn and the bells shall ring where there is any trouble. While the beacons burn and the bell rings, then anyone not joining in with the attempts to clear the invaders, is a traitor.

The chase became known as “The Hot Trod”.  Search for Hot Trod for more information.

The Sheriff of Nithisdale, the Stewart of Annandale, and the Stewart of Kirkcudbright in Galloway shall cause these bails to be kept and made, and ‘who so keepeth not the bails, shall pay for each default one mark.’

On the West March of Scotland ‘the Beacons to be sustained’ are set down as follows:
In time of warfare if a host of English come into Scotland, there shall a bail be burned on:
1. Trailtrow-hill,
2. and another on the Penchat-hill,
3. and on the Bail-hill above the Hame-ends,
4. one on the Cowdens above Castlemilk,
5. one on Quitsoun,
6. one on Drysdail,
7. and on the Burraw Skenton in Applegarth parish,
8. one on the Browan Hill,
9. and one on the Bleis (Blaze Hill)
10. in the tenement of Wamphray,

East March of Scotland beacons were maintained according to a statute in 1455, and their light was a signal for the Scottish forces to:
“assemble at Edinburgh and Haddington, abandoning to waste and pillage all the southern counties.”

1) Hume Castle,
2) at the Tower of Edgerhope,
3) Edgerstane, near the source of the Jed,
4) upon the ridge of the Soltra Hills, at Dunbar,
5) Dunpender (or Trapraine) Law,
6) North Berwick Law, and other eminences:

some places are on the Ordnance Survey or the Pont Blaeu maps that were made at the time.

The fear of invasion arises from real and imagined experience.  In the 14th century the Scots invaded and defeated the north of England. They entered through the East and Middle Marches and on their return via the west side they stopped at Carlisle where they besieged the city for ten days.

Lanercost Priory is 10 miles east of Carlisle and the monks recorded the events in latin and the documents became known as The Lanercost Chronicle. There is some bias and inaccuracies in the Chronicle but this account of the siege seems plausible.

Also, a little later in the same year, on the feast of S. Mary Magdalene, the King of Scotland, having mustered all his forces, came to Carlisle, invested the city and besieged it for ten days, trampling down all the crops, wasting the suburbs and all within the bounds, burning the whole of that district, and driving in a very great store of cattle for his army from Allerdale; Copland, and Westmorland.

But there were seven or eight similar machines within the city, besides other engines of war, which are called springalds, for discharging long darts, and staves with sockets for casting stones, which caused great fear and damage to those outside.