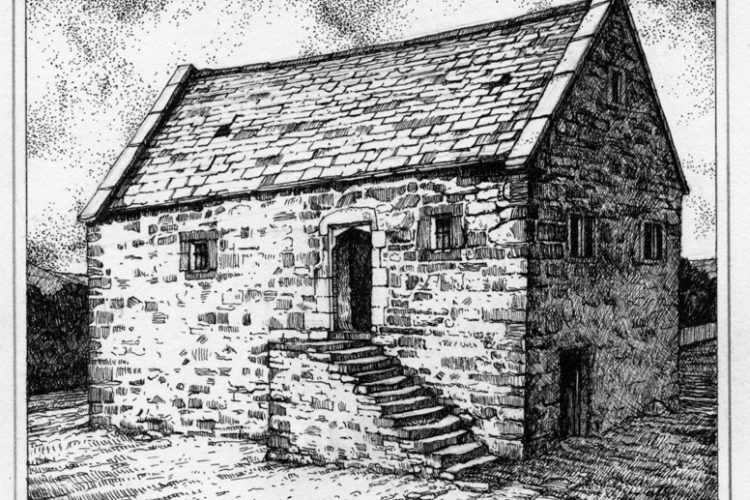 Cut-away reconstruction drawings of the layout of typical Bastle-Houses

The word Bastle was derived from the French term “Bastille” and denoted a stronghouse. They are to be found throughout the length of the Border. Bastles were often grouped together and were defensible farmhouses; Pele-Towers or Tower-Houses were the preserve of the more lordly classes.

Livestock was driven into the basement through the door in the end wall (7b). The herdsman then barred the door from the inside and escaped through a hole in the fireproof stone-vaulted ceiling into the family’s living space above. The hole was then secured with a trapdoor.

The unvaulted Bastle (7a) is found in the English West March but served the same purpose as its more fireproof stone-vaulted counterpart which was more common in the Middle and East March. This cut-away drawing is based on a surviving Bastle at Glassonby in Cumbria.

The terms “bastle” and “bastle-house” were used loosely in the 16th and 17th century for stronghouses and “pele-towers”. In Cumberland these terms were unknown as late as the 19th century.

Typically bastles are rectangular in plan and have two storeys and quite steeply pitched gables. The walls are about four feet thick and built of large irregular stones infilled with chippings set in a weak lime mortar. The ground floor has a single narrow doorway set in the middle of the gable wall. The jambs and lintel are finished with a chamfer or simple roll moulding and there is a small relieving arch above. The jambs have rebates or checks for two “harr-hung” doors (turning on pivots in sockets above and below). These are secured by wooden drawbars housed in tunnels in the wall. There are no windows in the basement, only ventilation slits.

Access to the upper floor is by a doorway set towards one end of the long wall which was originally reached by a removable ladder. In surviving bastles these have been replaced by a stone stair. Windows with iron bars are set on either side of the doorway; sometimes there are two in the longer length of wall. A fireplace was usually set against the gable wall farthest from the door.

No original bastle roof survives but evidence suggests that most would have had straight principals with feet that curved down to meet the wall face. Roofs of this type with ridge-pieces and collar-beams are common in the region and it is supposed that most bastles were roofed in this way (fig.7a shows this arrangement with a kingpost). All bastle roofs are now covered with slate but in the past some were thatched, probably with heather.

There are two varieties of bastle, those in which the upper floor is carried on timber beams (fig.7a) and those in which the floor is carried on a stone barrel vault (fig.7b). There are examples of unvaulted bastles in Roxburghshire, on the upper Jed Water, these represent a northern extension of a considerable group of similar structures over the Border in Redesdale.