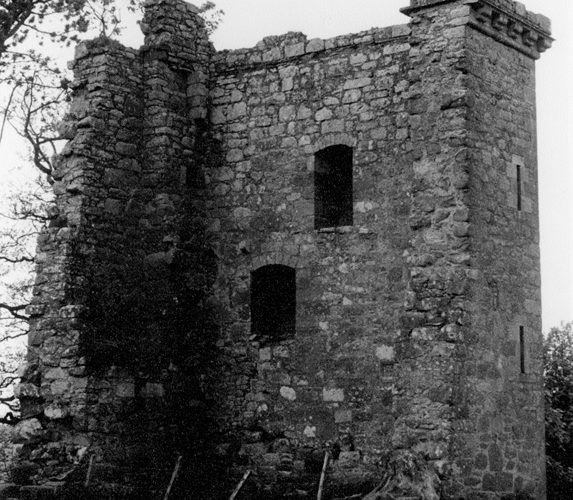 The ruins of Woodhouse Tower are situated on the opposite bank of the Kirtle Water to neighbouring Robgill and Bonshaw Towers. Only the north wall remains standing to the height of the parapet, the rest has fallen, but the oblong plan can be traced in the overgrown foundations.

Woodhouse Tower was a stronghold of a branch of the Irving family and is clearly very similar in design to neighbouring Bonshaw though without the plinth course. The tower originally rose to three storeys above a vaulted basement with an entrance at ground-level.

The remains are partly original ruins and partly a “romantic” reconstruction of 1877, carried out after a large section of wall collapsed. Some years earlier, in the winter of 1830-31 the south side of the tower fell down in a storm, “with a dreadful crash”. Only the northern part of the tower was stabilised and restored and a new narrow newel-stair was built in the corner, without openings other than that which gave access to the parapet.