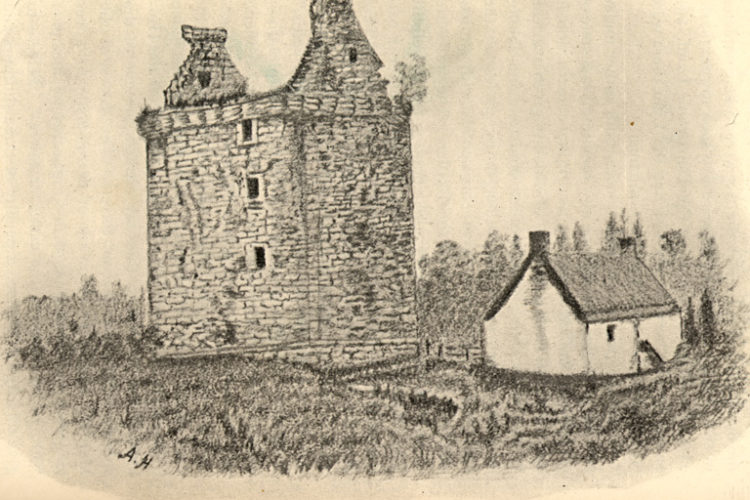 Generalities and Cut-Away Drawing of Tower-Houses by Pete Armstrong.

The terms “Tower-House” and “Pele Tower” are the cause of some confusion. Though the terminology differs, the function of these buildings is similar and their form has much in common too. “Tower-House” is generally in use on the Scottish side of the Border; “Pele-Tower” describes its counterpart in England.

A typical tower-house has its accommodation arranged vertically. The ground-floor is usually a stone-vaulted storeroom, lit only by slit-windows. The storeys above provide living accommodation for the laird and his family. Above the wall-head there may be a battlemented parapet and a wall walk.

The cut-away drawing is based on the Hollows Tower which is a very rare survival in this area, standing as it does, so close to the Border in Eskdale in Dumfriesshire. The elaborate corbelling, that once supported the parapet, is a late addition to an earlier and plainly functional rectangular tower that must have been added when the upper part of the tower was remodelled about the time of the Union.

The structure above the wallhead, including the beacon probably belongs to this conjectural remodelling too. The present roof is a recent restoration and, presumably because of the steep angle of the gables, does not have a pointed apex but terminates in a flat section; a curiously unique arrangement.

The cut-away drawing shows the parapet as it probably appeared in the late 16th century and proposes a more rational arrangement of the roof. In the vaulted basement, a section of the stair-wall that protrudes into the rectangular space of the tower has been further cut-away to show the entry to the newel stair.