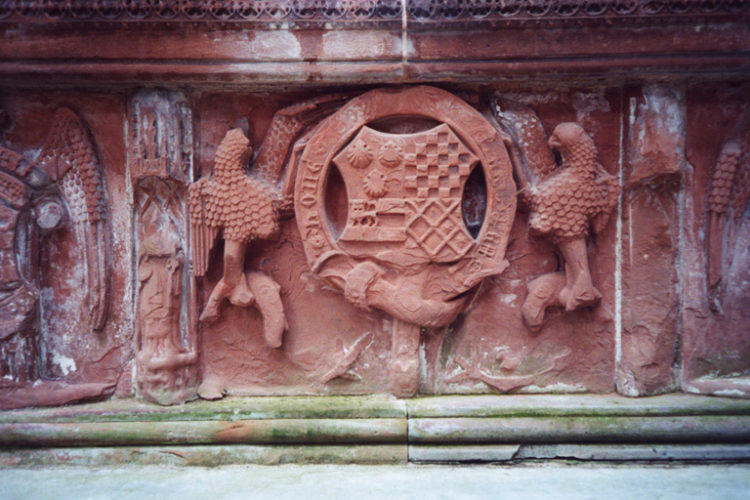 The tomb of Thomas Lord Dacre, of Flodden fame, who died in 1525 stands in the Chapel of St. Catherine in the South Transept of the Church of Lanercost Priory. This part of the church stands open to the sky now and has been in ruins since the dissolution of the Augustinian Priory in 1536.

Lord Dacre was Warden of the English West March from 1509 and was one of the ablest soldier-politicians to hold the Office. He fought at the head of his Borderers at Flodden and was still in the saddle, pursuing Henry VIII’s aggressive policy toward the Scots, when he died after a fall from his horse in 1525.

There is no effigy but the tomb carries a fine display of heraldry, now badly worn in places. The central panel of the north side of the tomb displays Lord Dacre’s arms on a shield encircled by the insignia of the Order of the Garter. The arms are a display of the extent of his lands, they are; Dacre, Vaux of Triermain, De Lancaster, Morville. Thomas Dacre married Elizabeth Greystoke, in fact; “without leave asking, and not without peril to his person, did take her”. The marriage added important lands to the Dacre possessions. The arms of Greystoke are displayed on the south side of the tomb.