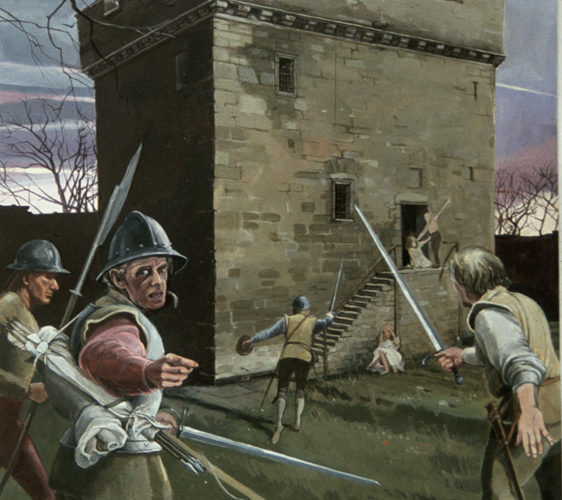 The Dawn Raid: a painting illustrating the capture of a Border tower in 1547.

Sir Thomas Carleton in his report on the capture of Lochwood Tower in Annandale in 1547 left an interesting account. “We came there about an hour before day; and the greater part of us lay close without the barnekin; But about a dozen of the men got over the barnekin wall,—–

—-and stole close into the house within the barnekin, and took the wenches and kept them secure in the house til daylight. And at sun-rising, two men and a woman being in the tower, one of the men rising in his shirt, and going to the tower head, and seeing nothing stir about

—-he called on the wench that lay in the tower, and bade her rise and open the tower door and call up them that lay beneath. She so doing and opening the iron door, and a wood door without it, our men within the barnekin brake a little too soon to the door; for the wench perceiving them, leaped back into the tower, and had gotten almost the wood door to, but one got hold of it that she could not get it close to; so the skirmish rose, and we over the barnekin and broke open the wood door, and she being troubled with the wood door left the iron door open, and so we entred and wan the Loghwood.

Watching the Border Beacons, Bells and Watchers England and Scotland were afraid of invasion from…