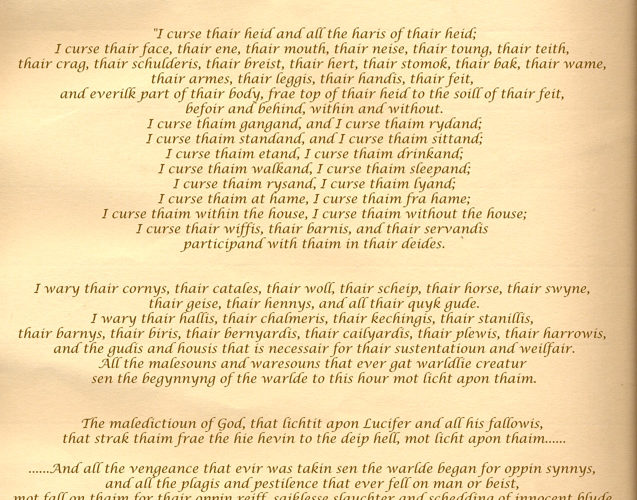 THE ARCHBISHOP OF GLASGOW’S “MONITION OF CURSING”

An Interpretation of the Bishop’s Curse

Good folks, here at my Archbishopric of Glasgow letters under this round seal direct me or any other chaplain, made and mentioned, with great regret, how heavy he bears the piteous, lamentable, and sad complaint that pass over our realm and comes to my ears, …. We hear how that men, wiffis and bairns, redeemed by the precious blood of our Saviour Jesus Christ, and living in his laws, are innocently part murdered, part slain, burned, hurt, spoiled and ripped, openly by daylight and under silence of the night , and their farms and lands laid waste, and their self banished therefor, … as well as others be common traitors, reivers, thieves, dwelling in the south part of this realm, such as Tevidale (Teviotdale) Esdale, Liddisdale, Ewisdale, Nedisdale (Nithsdale), and Annanderdaill; which people have been in various ways pursued and punished by the tempered sword and our sovereign lord’s authority and does not fear the same.

And therefor my Lord Archbishop of Glasgow has thought it expedient to strike them with the terrible word of the holy church, which you must not stand against and resist; and has charged me or any other chaplains, to denounce, declare and proclaim them openly and general cured, at this market cross, and all other public places.

Therefor through the authority of Almighty God, the Father of heaven, his Son our Saviour, Jesus Christ, and of the Holy Ghost, through the authority of the Blessed Virgin Saint Mary, Saint Michael, Saint Gabriel, and all the angels; Saint John the Baptist, and all the holy patriarchs and prophets; Saint Peter, Saint Paul, Saint Andrew and all holy apostles; Saint Stephen, Saint Lawrence and all holy martyrs; Saint Giles, Saint Martyn, and all holy confessors; Saint Anne, Saint Katherine and all holy virgins and matrons; and all the sanctified and holy company of heaven; by the authority of our Holy Father the Pope and his cardinals and of my said Lord Archbishop Bishop; by the advice and assistance of my lords, archbishops, bishops, abbots, priests, and other prelates and ministers of the holy church.

I curse their wiffis, their bairns, and the servants that participated with them in their deeds.

I worry their cattle, their sheep, their horse, their swine, their geese, their hens, and all their livestock.

I curse their halls, their rooms, their kitchens, their barns, their cowsheds, their barnyards, their cabbage patches, their ploughs, their harrows, their goods and houses that are necessary for their sustenance and welfare.

All malevolence and curses that ever affected worldly creatures since the beginning of the world to this hour must light upon them.

The malediction of God, that lighted upon Lucifer and all his followers, that strike them from the high heaven to the deep hell, must lie upon them.

The fire and the sword that stopped Adam from the gates of Paradise, must stop them from the glory of heaven until they forbare and make amends.

The evil that lay on cursed Canaan when he slew his brother Abel senselessly , must light on them for the senseless slaughter that they commit daily.

The calamity that fell on all the world, man and beast, and all that ever took life, when all was drowned by the flood of Noah, (except Noah and his ark) must fall upon them and drown them, man and beast and make this realm free of them for their wicked sins.

The thunder and lightning that set down as the rain upon the cities of Sodom and Gomorrah, with all the lands about, and burned them for their vile sins, must rain upon them, and burn them for openly sinning.

All the plagues that fell upon Pharaoh and his people of Egypt, their lands, corn and cattle, must fall upon them, their belongings, places, steddings, crops and beasts.

The water of the Tweed and other rivers that they ride shall drown them, as the Red Sea drowned King Pharaoh and his people of Egypt, pursuing God’s people of Israel. The earth must open, rift and cleave and swallow them quick to hell, as it swallowed cursed Dathan and Abiran, that withstood Moses and the command of God.

And all the vengeance that ever was taken since the world began for open sinning, and all the plagues and pestilence that ever fell on man or beast, must fall on them for openly stealing, senseless slaughter and shedding of innocent blood.

I disown and part them from the church of God, and deliver them quickly to the devil of hell, as the Apostle Saint Paul delivered the Corinthian. I forbid the places they enter from divine service, ministering the sacraments of the holy church, except the sacrament of baptising only; and forbid all churchmen to hear confession or absolve them for their sins, until they are absolved of this cursing.

I forbid all Christian man or woman to have any company with them, eating, drinking, speaking, praying, staying, going, standing, or in any other deed doing, under the pain for deadly sin. I discharge all bands, acts, contracts, oaths and obligations made to them by any person, either out of loyalty, kindness or personal allegiance, so long as they sustain this cursing, so that no man will be bound to them, and that they are bounded to all men.

I take from them and cross down all the good deeds that ever they did or were said to do, until they rise from this cursing. I declare them excluded from all morning prayers, matins, services, evening song, dirges or other prayers, whether from book or bed; from all pilgrimages and all deeds done or to be done in the holy church or be done by Christian people, while enduring this cursing.

And, finally, I condemn them perpetually to the deep pit of hell, there to remain with Lucifer and all his fellows, and their bodies be taken to the gallows of the Burrow Moor, first to be hanged, then ripped and torn with dogs, swine and other wild beasts abominable to the world. And their faces gone from your sight, as must their souls be gone from the face of God, and their reputation from the world, until they forbear their open sins mentioned, and rise from this terrible cursing and make Satisfaction and penance.