“inhabited by a warlike people, who on account of the very frequent wars in previous centuries between the Scots and the English, are highly prepared for military service and sudden attacks.” 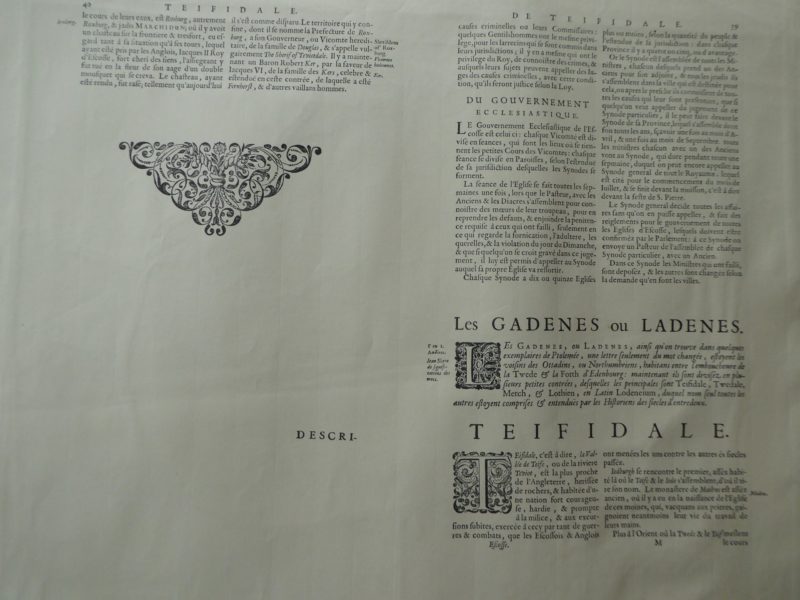 Neighbouring the Otadini or Northumbria were the GADENI, who are called LADENI in some copies of Ptolemy, with a change of one letter. They lived in that region which lies between the mouth of the River Tweed and the Forth at Edinburgh, and is today divided into many sub-regions, of which the chief are Teviotdale, Tweeddale, the Merse, and Lothian (in Latin Lodeneium); under this last name all were included in writers of the Middle Ages.

TEVIOTIA, in the vernacular TEVIOTDALE.

Teviotdale, that is Valley of the River Tefius or Teviot, among the steep borders of hills and rocks, close to England, is inhabited by a warlike people, who on account of the very frequent wars in previous centuries between the Scots and the English, are highly prepared for military service and sudden attacks.

Among them the first town is Jedburgh, a well-populated burgh, near the confluence of the Rivers Teviot and Jed, whence comes its name. Also Melrose, a fairly old monastery, in which while the Church stood high in our land the monks were of that old character, who had leisure for prayers and sought their living by the work of their hands.

More to the east, where the waters of Tweed and Teviot come together, is Rosburgh, also called Roxburgh and formerly Marchidun, because it was at the boundary; here once was a castle strong by its position and by fortified towers. It had been occupied by the English, and while James II, King of Scots, was besieging it, he was killed prematurely by a piece of a large gun which chanced to explode, in the flower of youth, much regretted by his people. The castle was surrendered and to a large extent levelled, and has now in a measure disappeared.

The adjacent territory, called hence the Prefecture of Roxburgh, has its own hereditary Prefect or Viscount from the Douglas family, called in the vernacular the Sheriff of Teviotdale. Now however Roxburgh, thanks to King James VI, also has its own Baron, Robert Ker, from the family of Kerrs which is in this area especially famous and numerous; among them those of Ferniehurst and others, nourished in the study of war, have become most distinguished.