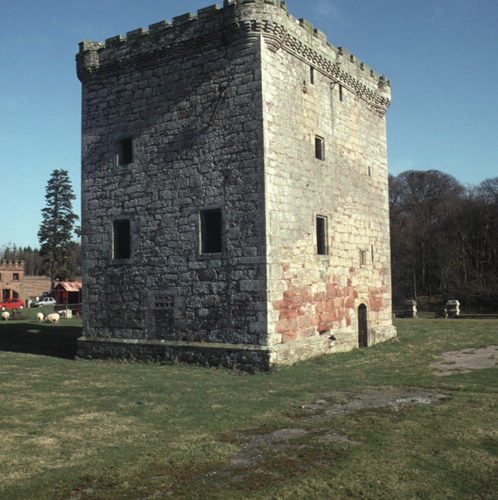 This oblong 16th century tower stands three miles north-east of Annan. It consists of four storeys underneath a crenellated parapet, though this is a modern reconstruction probably built at the same time as the modern mansion was attached.

The mansion, that was still attached in the 1920s, has been demolished now but the marks of attachment and the communicating openings still disfigure the north-east wall of the tower. The romantic ruins of Stapleton stand isolated again and unencumbered by the vanished Victorian pile.

The roof at Stapleton has fallen in now but would have been gabled inside the wall-walk with an attic. The roofless condition of the tower has left the fabric exposed to the ravages of the elements and there is a need for some care and attention to stabilise the ruins and prevent further deterioration. The basement is vaulted and the turnpike stair is in the south-east angle. Stapleton is associated with the Irvine family though the heraldic panel above the doorway is empty. In 1626 the ownership was in dispute. In that year the tower was in the possession of one Fergus Graham of Blawatwood, apparently “be vertew of gude and undoubted rightis”. In January Christie Irving, son of the deceased Edward Irving of Bonshaw Tower and “sometime of Stabletoun,” accompanied by “a number of fugitive lymmaris (rascals) of the lait Bordouris,” surprised and captured the tower “airlie in the morneing afoir the break of day” and fortified and provisioned the place “as ane house of warre.”
They were still in possession at the end of July despite the efforts of Sir John Charteris of Amisfield along with Sir William Grier of Lag and James Maxwell of Kirconnell to evict them. Unfortunately the record of the outcome of these events does not seem to have survived but a commission was given in July to four earls and twelve knights and lairds to raise a force to recover the tower and restore it to Fergus Graham.