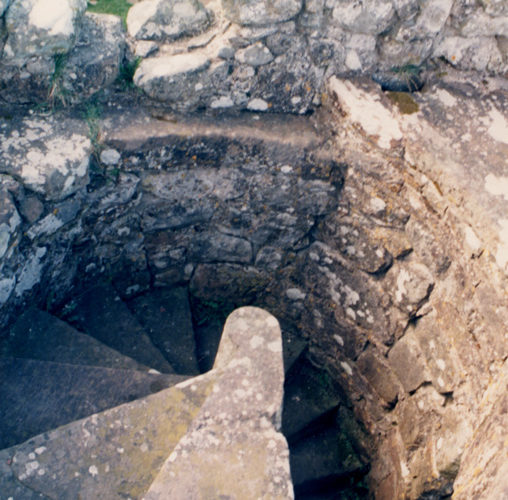 Newel stairs are so-called from the central continuous post or newel around which they spiral upwards. The protruding stair towers in which they were often housed gave Scottish tower-houses their characteristic L-plan.

In rectangular tower-houses the newel stair was built into the thickness of the wall in a corner but protruded inwards to restrict the living space. They were constructed from a series of similar keyhole-shaped modules placed on top of each other and offset to make a step. The inner shape formed the newel post and the outer ends were set into the walls of the stairwell.

The Kers of Ferniehurst were famously left-handed, to the extent that left-handedness became known as Ker-handed in the Borders. They are said to have had the newel stairs in their strongholds built with anticlockwise spirals, in the opposite way to the norm, to aid the defence of the stair by a left-handed swordsman.