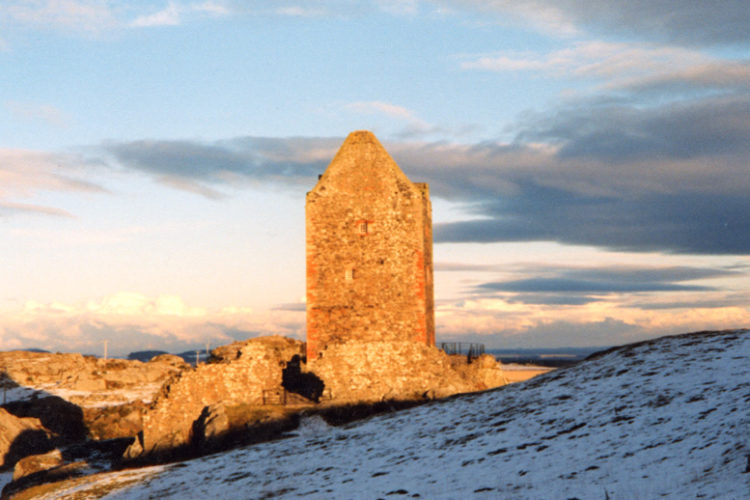 Smailholm is strongly situated on a rocky outcrop above a dark lochan six miles west of Kelso and commands extensive views to the Border and beyond. It is a notable landmark of the Scottish Middle March and is visible for miles around. The tall well-built tower is surrounded by the ruins of a barmkin and outbuildings.

The lofty vaulted ground-floor is provided with corbels to carry an entresol floor. Above this the tower rises to five storeys in all. A stone-slabbed roof is built over the vaulted ceiling of the upper storey and access to the parapet-walk, which crowns only the long sides of the tower, is gained from this level.

Smailholm was built about the middle of the 15th century by the Pringle family who were factors of the Earl of Douglas. It was acquired early in the 17th century by the Scotts of Harden. Sir Walter Scott spent much of his childhood at nearby Sandyknowe, the farm of his grandfather. He introduces Smailholm tower into both “The Eve of St. John” almost his earliest Ballad and into “Marmion”. Smailholm is now in the care of Historic Scotland. A series of tableau illustrating scenes from Scott’s “Minstrelsy of the Scottish Borders” is on display in the tower.