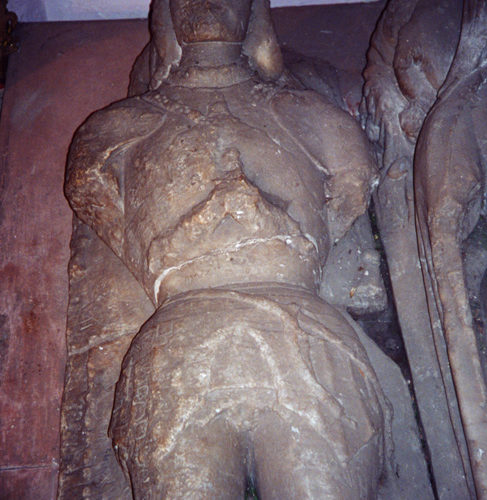 Effigy from the Tomb of Sir Richard Salkeld, Captain of Carlisle d.1500

The effigy of Sir Richard Salkeld of Corby Castle, who died in 1500 and his wife Jane Vaux, daughter of Roland Vaux of Triermain Castle is preserved in Wetheral Church. The alabaster effigies have been neglected in the past and are now mutilated and badly worn yet they still display features of interest.

The tomb chest upon which the effigies now rest is a replacement of an original that probably carried a display of heraldry. A shield displaying the Salkeld arms, (green, fretted silver) was formerly by the effigies head. A livery-collar of linked Tudor roses indicates Sir Richard’s loyalty to Henry VII.

On the arch above the tomb ran the following lines-

“Here lies Sir Richard Salkeld, that knight, -Who in his land was mickle of might;-The captain and keeper of Carlisle was he,-And also the lord of Corkebye”.

The Salkelds played an important part in the affairs of the West March and a Richard Salkeld, probably the father of his namesake commemorated by the effigy, was Warden of the West march under Richard III.