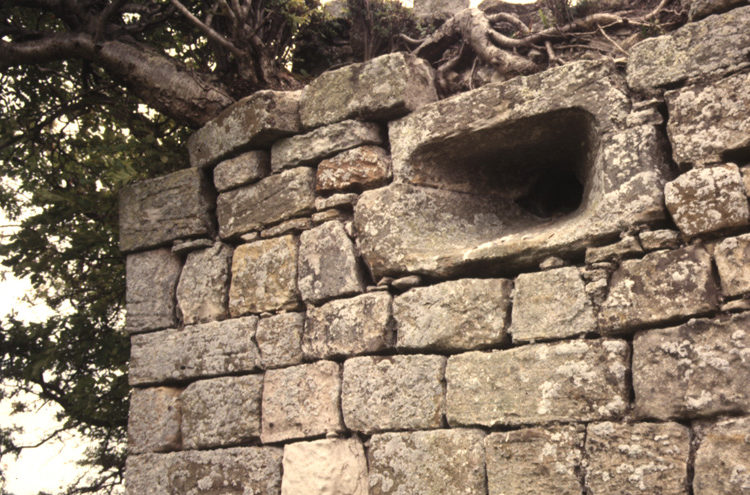 In response to the introduction of firearms in the 16th century, gun-loops, gun-holes or shot-holes as they were called in contemporary parlance, began to be a feature of the design of Border Towers. Early shot-holes were formed by simply enlarging the lower ends of arrow-slits to take the muzzle of a gun.

Early in the 16th century the widely splayed, horizontal shot-hole made its appearance as a feature of many Border towers. To achieve a maximum field of fire, without weakening the structure, they were built with their narrowest part or throat in the centre of the wall, with openings splaying out on both sides.

The throat itself was a carefully cut sandstone block usually pierced by a circular hole that served as a gun-rest and left room for sighting the gun too. These shot-holes were normally confined to the ground-floor, though there are examples of their introduction at a higher level and though the reason for their positioning is not always the same, it is usually readily apparent. At Dryhope Tower in Yarrow (illustrated) there are no shot-holes confronting the hillside to the north. The builder has in this case enclosed the entrance on that side inside the barmkin. Defence on that side would have been conducted from the wall-head.