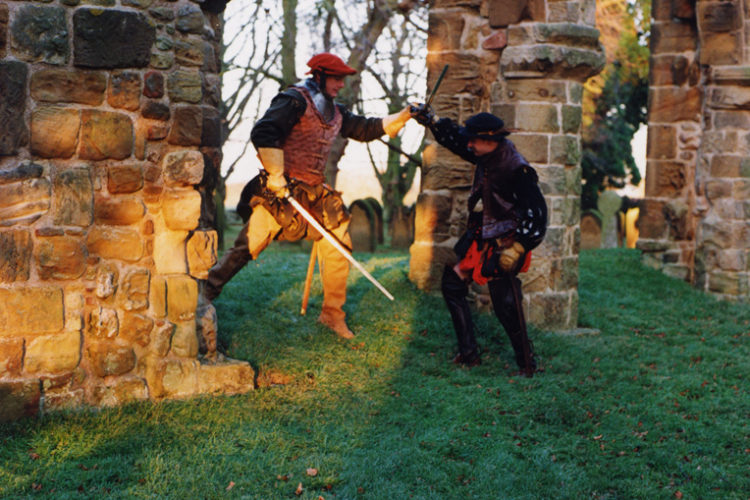 Most border towns did not have walls and so people were wary and frightened of any strangers. They could be the outlaws and swordsmen checking the place before plundering it. This extract from the Selkirk Protocol Book of Sir Ninian Brydin describes an incident which shows that attack was a form of defence when strangers were seen.

One day in 1530, some men were travelling along a road. No doubt they were muddy, wet, unwashed and looked generally poor. Perhaps the travellers were frightened of being robbed on the track because there were Reivers about. Perhaps the travellers saw the Selkirk men and thought they were thieves and took up a defensive attitude which the Selkirk men thought was an attacking attitude.

The result was a fight. The Selkirk men got the upper hand and beat them and took their belongings. No doubt the travellers took fright and fled to the nearest town (Selkirk) to complain that they had been robbed. The Selkirk men went home to boast of robbing the Reivers. Imagine the uproar when both parties met in the town square!

The travellers were innocent men from Moffat going about their lawful business. Oops! The Selkirk men quickly realised that they were now robbers and thieves and were in big trouble. They thought that a quick way out was to go to a man of the law (Sir Ninian Brydin) and swear that this was an accident of mistaken identity. We presume that the travellers were given their belongings and we expect that they would be compensated with the hospitality of the over enthusiastic Selkirk men.