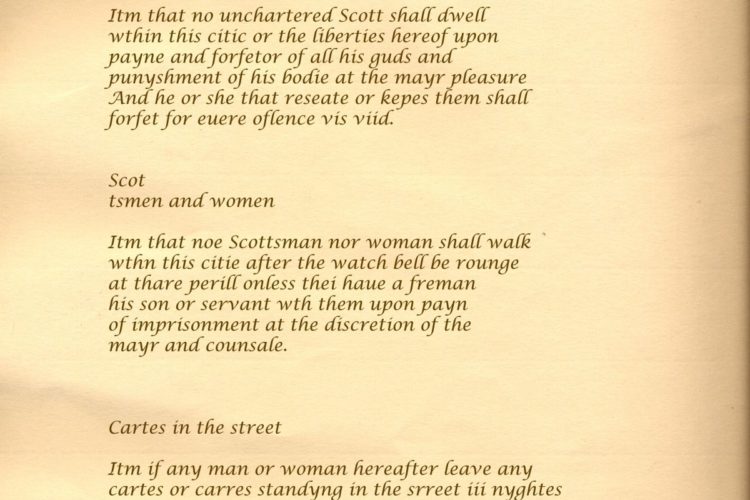 Scotland and England feared theft and invasion from each other. Towns were where the wealth resided, thus invaders and thieves sought to strip towns of their valuables. Towns were also where power and authority resided and an invading army would seek to crush any opposition by taking over the town and imposing a new order.

Border towns suffered very badly from both English and Scottish invasions. Edward I slaughtered 17000 in Berwick while Dacre and Surrey burned Jedburgh and many other settlements as part of a cynical punishment and clearance action.

The Scots had their invasion, as The Chronicle of Lanercost states (1272-1346):
Sir Edward de Brus, Sir James of Douglas, John de Soulis and other nobles of Scotland invaded England by way of Berwick with cavalry and a large army, and, during the time of truce, devastated almost all Northumberland with fire, except the castles; and so they passed forward into the bishopric of Durham; but there they did not burn much, for the people of the bishopric ransomed themselves from burning by a large sum of money. Nevertheless, the Scots carried off a booty of cattle and what men they could capture, and so invaded the county of Richmond beyond, acting in the same manner there without resistance, for nearly all men fled to the south or hid themselves in the woods, except those who took refuge in the castles.

On the way back to Scotland the Scots besieged Carlisle for ten days before giving up. Even though this siege was in 1315 the fear of the Scots ran deep and caused the following rules to be made for the defence of the city. However, similar fears and similar rules were repeated in many towns on both sides of the border. Thus when you read the rules you may use a mirror image of the wording to realise the Scottish attitudes to the English.

The gates of the city were to be locked about half past eight in the evening after the ringing of the common bell. About half an hour later, around nine o’clock the first watch would start. If the porters failed to lock the gates on time they would be fined or some other penalty imposed by the Mayor and Council.

Rule 35 Watching nightly of the walls

N.B. Sometime after the accession of James I (James VI of Scotland) and the union of the two crowns in 1603, the setting of the watch appears to have been abandoned in Carlisle.

No tradesman nor workman was to take as apprentice any man born north of Blackford (now on the A7 on the way to Longtown) or north of the River Irthing. If this rule was infringed the fine was £10 (a very large sum of money in those days).

No unchartered Scot was to dwell in the city on pain of forfeiture of all his goods and a punishment (e.g. whipping). Any citizen of Carlisle harbouring a Scot was to be fined 6s 7d. N .B. Scottish people had to be licensed to live and work in England. See the licences from Henry Lord Scrope, Lord of the Western Marches to John McKye 1566 and to Andrew Young, 1581.

Itm that no unchartered Scott shall dwell wthin this citic or the liberties hereof upon payne and forfetor of all his guds and punyshment of his bodie at the mayr pleasure And he or she that reseate or kepes them shall forfet for euere oflence vis viid.

Note that the use of the language has changed.

No Scots man or woman was allowed to walk in the city after the watch bell had been rung unless they were with a freeman, a freeman’s son or a freeman’s servant. The penalty was imprisonment at the discretion of the Mayor and Constable.

Itm that noe Scottsman nor woman shall walk wthn this citie after the watch bell be rounge at thare perill onless thei haue a freman his son or servant wth them upon payn of imprisonment at the discretion of the mayr and counsale.

The fear of invasion arises from imagination and from experience.  In the 14th century the Scots invaded and defeated the north of England. They entered through the East and Middle Marches and on their return via the west side they stopped at Carlisle where they besieged the city for ten days.

Lanercost Priory is 10 miles east of Carlisle and the monks recorded the events in latin and the documents became known as The Lanercost Chronicle. There is some bias and inaccuracies in the Chronicle but this account of the siege seems plausible.

Also, a little later in the same year, on the feast of S. Mary Magdalene, the King of Scotland, having mustered all his forces, came to Carlisle, invested the city and besieged it for ten days, trampling down all the crops, wasting the suburbs and all within the bounds, burning the whole of that district, and driving in a very great store of cattle for his army from Allerdale; Copland, and Westmorland.

But there were seven or eight similar machines within the city, besides other engines of war, which are called springalds, for discharging long darts, and staves with sockets for casting stones, which caused great fear and damage to those outside.