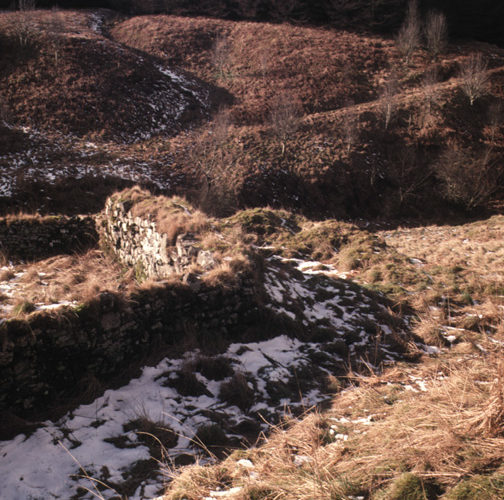 The remains of Riccarton Tower stand on a natural platform, above Riccarton Burn, in a clearing in the surrounding forestry plantation. Against the south wall, a sheepfold has been built, probably from the reworked stones of the fallen tower. The site is remote and the roughness of the terrain make access difficult.

Though the remains are fragmentary and overgrown, they are of great interest, being undisturbed since the site was abandoned. The tower was small and built of large rough rubble probably without dressed stonework. The location and visible masonry suggest a ruggedly functional stronghold of the 16th century.

The wall incorporated by the sheepfold stands to about first-floor height, there is no evidence of vaulting, and three sides of the tower lie tumbled under grassy mounds. The walls are about four feet thick but only excavation would reveal any further details. The small rectangular shape of the remains suggests a tower rather then a bastle-house. To the north there is evidence of further structures, the tower was not isolated, there seem to have been supporting buildings and enclosures.