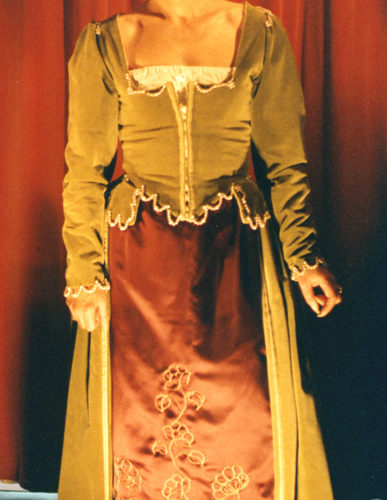 Wealthy ladies would wear an underskirt made of a heavy and expensive material and the overskirt would be split at the front to expose the skirt which the most wealthy may embroider with gold embroidery or pearls. Less wealthy ladies imitated the fashion by having a triangular piece of material sewn behind the split of the overskirt, giving the appearance of an underskirt.

Cloth was made on local looms, often at home, and the highly skilled weaver would create textures and patterns that are not now seen, for example the diaper12 weave that produced an appearance of small lozenges in the woollen weave.

Letters show that even wealthy families went to auctions to purchase second hand clothes from the deceased.

Reivers would steal not only cattle but bales of cloth or even the clothing of a victim. Even the Rev Timothy Pont was stripped of his clothes by thieves while surveying Scotland. (see Pont/Blaeu maps)

The Reiver’s wife is wearing clothing of the period. Under the outer layer of the bodice is an inner garment called a shift which is made of soft linen. The outer garment has sleeves which are laced in and which can be removed.

The attachment of the sleeves was by ribbons. They were not only functional, but became a fashion item with different colours and types of ribbon, and even different shaped ends of the cut ribbons.

The young lady is wearing a dress of the Reiver period. It is laced together. There are bones to give the bodice shape. The material is of an expensive soft velvet.

The dress is of the style that normally would have an outer dress and an under-dress as two separate garments. This girl has an imitation of the style with her outer dress split in the centre and a triangular piece of a different coloured material sewn behind the split. This gives the appearance of an expensive under-dress without costing as much.

The laced bodice is cheaper to make than buttons fastenings. Buttons were made from wood, bone or metal and often covered with material.

Clothing in the mid and late 16th century had become not only functional but highly fashionable. Clothing was expensive and so the same outfit had to suffice for work and for social occasions. Sleeves were sometimes attached to the body by ties or ribbons. This allowed them to be removed for rough work and also allowed the sleeves to be replaced if they were worn. Also, if the lady wanted to change the design of her outfit she need only change the sleeves to a different colour or style.

Stretch material and elasticated supports were not available and buttons and button holes were expensive and difficult to make. The ribbons that tied the clothing became an ornate part of the fashion.

Often the under-dress was embroidered with expensive silk or even gold thread. The most wealthy people would even embroider pearls on the dress. There are reports of pearl fisheries at the coast of Cumberland at that time and freshwater pearls are still found in some rivers of the borders.

Women normally wore headgear. It was considered ill mannered not to wear something on the head. These Reiver re-enactors do not have headgear but the women of the period would wear something, even a feather, though a scarf was a normal item.

Shoes of Woman from Reiver Period

The ladies are wearing latch shoes with the upper made of leather and the sole made of cork. There were no left or right feet. Poor people wore simple sandals with a single strap over the foot holding the sole on. Very poor people had no shoes.

The wife of the Warden’s hiedsman introduces her children. One of her children is 14 years old and ready to be married. She is in her best clothing to attract a husband. Clothing was an important indication of status and wealth.

The 13 year old is likely to be married within the year. The older teenage daughter has been be-reived or bereaved and has come home.

Women, Marriage and Children of the Reivers

Robert Carey became well acquainted with the Reivers. At various times he was in charge of the three Marches of England. He wrote his memoirs in detail and part of this detailed account describes how he visited a condemned Reiver in the disguise of a priest. The Reivers confessed his sins freely and admitted sleeping with 40 wives! We should not infer too much from this single confession though it does raise a lot of interesting questions.

A folklore tale illustrates a chilling reminder of the perils of being associated with reiving. It is reported that when a traveller visited Bewcastle he asked a lady where the men were. She replied that they were all in Carlisle (Castle) – she meant that they had been caught reiving and were likely to be hanged.

Women were often the secondary victim of a Reiving raid. The Reivers would raid a farmstead and if the husband fought to protect his property then he was likely to be killed by the Reivers. This must have been a frequent occurrence because the phrase became part of the local language “She was be-reived” and this entered our normal language as “bereaved”.

The wife of the Warden’s hiedsman introduces her children. One of the children is the kitchen maid.

Little is known about the care of children who were left after the ravages of the Reivers. A wife whose husband was killed by the Reivers was said to be be-reived. It is likely that the children were taken into the family clan system and worked within the family system.
Filename: 50 hiedsmans wife PN  Record ID V1086

Vicars were the target of kidnap and ransom so much that some towers were combined with the church building and became known as vicar towers. In some parts of the border it was so unsafe for Priests to travel that they kept their bible hidden under their cloaks and became known as “book a bosom priests”.

This meant that marriages had to be delayed until the visit of a priest. A special pre-marriage relationship developed called “handfasting” where a couple lived as husband and wife until the priest visited. If the relationship resulted in children and the father was killed (in a raid) then the children born out of wedlock became adopted by the extended family of the parents.
This relationship is not unique to Reivers and many rural communities had “trial marriages” to be certain of the fertility of the couple because their children had to become workers on the land.

The border people ignored national laws of England and Scotland to such an extent that a set of Border Laws were created called the Leges Marchiarum. Even these laws were ignored. However, family honour and tradition governed the activities of these lawless people.

One aspect of family tradition was the blood feud in which a wrong committed by one clan on another had to be revenged by any member of the offended clan. The resulting retaliation on the originator could then result in a reciprocal blood feud. These feuds could last generations and their root cause forgotten.

The rape or murder of a woman was a cowardly act that would start a blood feud. There was also little honour in violence to women and Reivers liked to boast about their violence.

Women were not always the innocent victim and circumstances may have contrived to make thieving the only way to feed a family. Imagine the risk of sowing a crop when the reivers or an invading army could come at harvest time and reap the crop, or destroy it with the intention of making your farmland uninhabitable. The only reliable food may be food on the hoof, where it could be driven to safety at the sign of trouble. However, if the family was the victim of raids then the only action to feed the family was to go on another raid.

Part of the folklore of the Reivers is the tale of the wife who saw that the pantry was empty and when dinner was served she presented the husband with a spur on a pewter plate.

This is unlikely to be a true story but it does reflect the assumption that the Reivers would choose to fight and raid instead of indulging in peaceful farming.

Did the Border Cause the Reivers?

On the Scottish side, there was as much feuding between Scottish families for power as there was feuding between Scottish families and English families. On the English side, international politics and religious divisions meant that there was a fear of invasion from Scotland and one solution was to keep punishing the Scots so they were afraid to attack. In other parts of Scotland and England hunger did not cause the systematic raiding and feuding that was called Reiving. Reivers seem to have occurred because of the unique political and social circumstances that are associated with a national border.

Perhaps discussions about political independence should consider the troubles that occurred when Scotland and England were once separated.
Filename: 60 empty pantry PN Record ID V1094

Reiver men wore clothing that was primarily functional in defending the wearer from the weather and from the blows of opponents. However clothing also served to show status, wealth and success as well as reflecting the fashion of the time.

Reivers would rob with equal harshness their neighbours in Scotland and their enemies in England. Velvet, silk, fine textiles, cloth of gold and silver, all were current materials in military costume. The fashion and material from civilian wardrobes were integrated with the leather and steel of the defensive clothing and paid for, more often than not, by beatings with the flat of the sword, or even the cut¬ting edge, rather than in hard cash.

Should some men-at-arms meet a man or a woman, they would take everything he had, some¬times not even leaving a shirt. Fine cloths, gold chains, enamelled jewels, all could be had cheaply to garnish the armours. The Rev Timothy Pont was stripped of his clothes by thieves while surveying Scotland. (see Pont/Blaeu maps) V1067 V1083

An Inventory of a Woman from Selkirk

Each town in Scotland had its legal matters recorded in a protocol book. Selkirk is fortunate because local experts discovered an account of the daily events of the town in the 16th century and have transcribed and published their work. The contents of the house of Marion Dalglesch 1536 are listed and this is an extract of the clothing items.