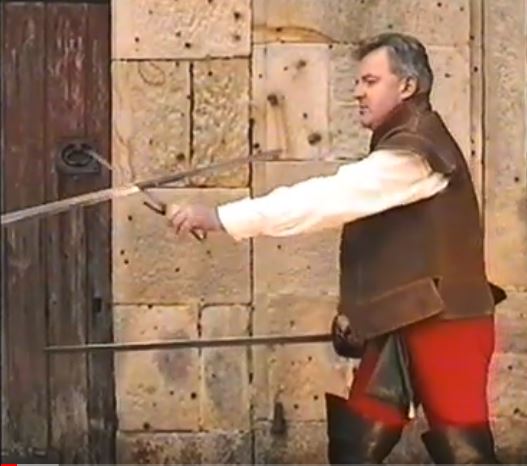 Swords and techniques used in 1500 – 1600 in the English Scottish border raids, skirmishes and wars where Border Reivers fought each other and fought for and against either side.  A rapier, backsword made for the reiver Douglas and a “hand and a half” sword are explained by military historian John Sadler of www.johnsadler.net

The following exploit of his was told to the writer by a descendant of the same family.
One morning as Barty came forth from his Pele tower he discovered that his sheep were missing. Forthwith he went up to the neighbouring Pele of his friend, Corbit Jock, to inform him of the loss.
‘Ay,’ said Corbit Jock, ‘Scotland will ha’ them dootless.’
So without more words the two friends set off upon the ‘hot trod.’ They travelled on foot down the Blakehope burn into Redewater, and so over the Carter into Scotland.
Losing the track of the sheep they determined to right themselves by ‘lifting’ the best S cots wethers they knew of, which were those at Leatham Farm, near Souden. There they selected the finest of the flock, and set off homewards, driving their booty before them. Whereupon the Scotsmen, becoming aware of this unexpected raid, sent two of their best swordsmen in pursuit. At Chattlehope Spout, Barty and Jock were overtaken, and a parley ensued. Barty generously offered to give up half of his flock, but ‘toomhanded’ he would not return home. The Scotsmen, however, would not agree to this, and soon swords were swiftly flashing upon the moor.
‘Leave the better man to me,’ cried Barty, and two desperate duels were at once in full swing.
The Scots swordsman shortly ran Barty through the thigh, but the Englishman, with a sudden wrench of his body, succeeded in snapping the sword in two, when he was promptly attacked by the second Scot, who had already slain his friend Jock.
Then Barty with a mighty back-handed sweep of his sword caught the Scot in the neck, ‘garring his heid to spang alang the heather like an inion,’ and then chased his fresh assailant and cut him down instantly. He then collected the swords, shouldered his dead friend, and drove off all the wethers [sheep] in front of him, and stayed not till he had brought back Jock to his own door-cheek [door step] and the sheep to his fold.

Video introduction to the Border Reivers 1500-1670 for whom rustling, raiding and blood feuds were…