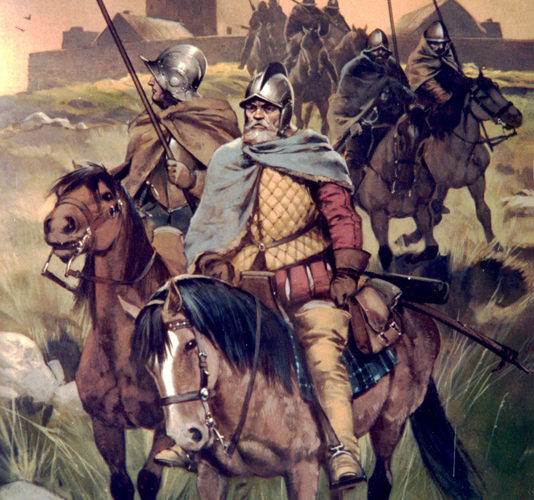 The arms and armour of the 16th century Reivers are mentioned in the contemporary verses of the “Fray of Hautwessel”. This was written in celebration of a raid on Haltwhistle in which the Armstrongs were worsted;

“A’ clad in jack, wi’ bow and spear,
Harnessed right weel,
I trow they were”.

The “jack” or “jack of plate” was a form of body armour, usually in the form of a doublet, laced up the front and reinforced internally with small iron plates, laced together to form a flexible body defence. Jacks were essentially the body-defence of the common soldier and were often made by cutting-up old armours.

Later, the ballad describes the effect of Alec Ridley’s “clothyard shaft”-
“It struck Wat Armstrong in the ee’,
Went through his steel cap,
heid and a’.”

The steel cap or “steel bonnet” of the Reivers was probably a simple “morion” though the more affluent may have sported an open faced “burgoynet”.

The “steel bonnet” was heavy, made the wearer hot and obscured his hearing and side vision. The actor from the Steel Bonnets re-enactment society is wearing a felt cap. Although this afforded little protection, he would sometimes wear a steel skull cap under the hat to protect his skull. This was known as a “secret“ hence the phrase “keep a secret under your hat”

Other defensive headwear would include varieties of leather caps some of which could be made form hard leather which offered some protection while remaining light weight.

The Reiver is displaying an arming cap. It is made with linen and padded with sheep’s wool. The purpose of the cap is to protect the head of the wearer when he wears a metal helmet.

The cap is similar in design to the caps seen in paintings of the time and although not the most fashionable headwear, it was certainly warm and practical.

The Reiver displays a metal burgoynet. There is a large crest over the top. There are hinged cheek flaps to facilitate putting the helmet on and off. There are leather straps connected to the inside of the helmet to tie under the wearer’s chin.

The helmet is very heavy on its own. There is a protective face piece called a beaver which can be worn but the Reiver has sacrificed the protection for weight.

Although we associated Reivers with Steel Bonnets, the helmet is expensive and not necessarily the best choice in all fighting situations. If the wearer became tired from wearing it then he was vulnerable. If the weight meant he could not turn his head quickly then he could be surprised.

The helmet’s side flaps protect the ears and side of the head but also stop the wearer from hearing commands and from hearing approaching enemies.

The helmet traps heat inside and on sunny days it could cause heat exhaustion.