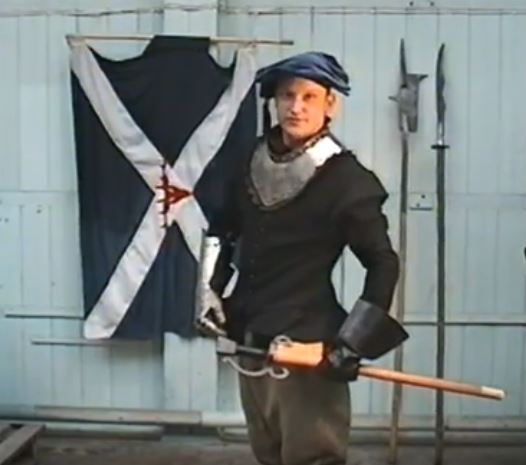 A Reiver foot soldier introduces himself

Scotland and England were in conflict in the 16th & 17th century so border raids, skirmishes and wars were frequent in this lawless land.  Cattle rustling robbery and murder were common when property and people were ripped away, in the dialect “rived off” or “riven” so the perpetrators were known as Reivers and many women lost their husband to the murderous reivers – and were be-reived.

The Border Reivers did not always travel by horse and this re-enactor is dressed in the clothing and equipment of a footsoldier. They were known as Footlouns. There was no uniform. Weapons and clothing would vary according to that which could be made, stolen or taken from a victim.

There are two records on this database of inventories that list the variety of clothing that was used in this period. The ordinary foot-soldier was the poor farm worker and would fight or raid in the same clothing that he worked in.

There was no armour for the foot-soldier and even the protective leather jack would be too expensive for him to own. If he was lucky he would steal something from the battlefield or from a Reiver which would protect him until it was stolen from him.

The Reiver actor is wearing a piece of armour on his right arm called a Bridal Arm. This is normally worn by a horseman. Its name is derived from the bridal reigns of the horse.

The foot-soldier is wearing it because in his words “In a battle you can pick anything you want from a dead man”. It is made from a series of plates stitched onto a leather glove.

It offers protection to the forearm and the protection is especially useful when using a sword. Even without a sword it is a deadly weapon when used as a punching glove.

A full suit of armour was expensive, heavy and stopped the user from moving quickly in a fight. It also made it difficult for his small horse to carry the Reiver the great distances that he would travel on his raids.

Partial protection was offered by pieces of armour such as this neck plate called a gourget. This is made from two pieces of steel, the collar and the breast part. The parts are riveted to leather underneath which made it more comfortable to wear and stopped the edges of the metal cutting the user’s neck. Extra rivets were added for decoration.

The main purpose of the gourget was to protect against blows to the neck and upper body. A breast and back plate could be added to give more protection to the upper body.

The Reiver has a small shield called a targe. This small shield is attached to his belt by a leather lace or it could be slung over his back. This allows him to have his hands free and he can walk better. It would also provide a dry seat when he rested in the wet moorland.

The shield is decorated with rivets which would also serve to catch the opponent’s sword blade. The targe was light and only used to deflect blows or stop a slashing blow. It could not provide protection against a lance point or an arrow or bullet.

The targe is held by threading the forearm through leather straps which are attached to a wooden arm protector on the inside of the shield.

Clogs were a very common footwear. They had solid wooden soles which were hard wearing, waterproof and comfortable. The uppers were leather and were nailed to the wooden base.

The toes were protected by a wooden toe piece and the solid construction meant that not only did they protect the wearer’s feet but he could also use them as an effective kicking weapon. In hand to hand fighting there were no rules except survival.

Boots were expensive and not very practical for a worker in the fields. Workers would often be barefooted but on long forays the wooden sole would not only protect the feet but keep the feet out of some of the muddy bogs and moorland that the Reiver crossed.