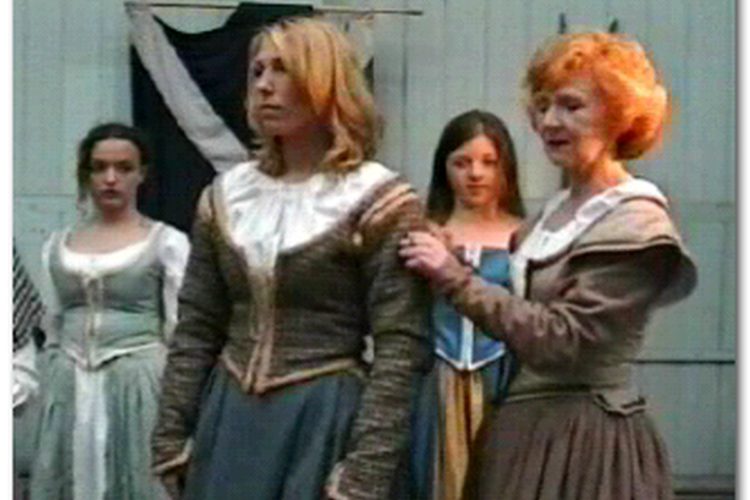 Clothing in the mid and late 16th century had become not only functional but highly fashionable.

Clothing was expensive and so the same outfit had to suffice for work and for social occasions. Sleeves were attached to the body by ribbons which allowed them to be removed for rough work and also allowed the sleeves to be replaced if they were worn or if the user wanted to change the colour of their outfit. The top and lower parts of outfits were often connected by ties; ladies skirts may be connected to their bodice by ties and men’s hosiery would be connected to their pantaloons or trousers by ties and the pantaloon may be connected to their upper garments by ties. Stretch material and elasticated supports were not available and buttons and button holes were expensive and difficult to make. The ribbons that tied the clothing became an ornate part of the fashion.

Wealthy ladies would wear an underskirt made of a heavy and expensive material and the overskirt would be split at the front to expose the skirt which the most wealthy may embroider with gold embroidery or pearls. Less wealthy ladies imitated the fashion by having a triangular piece of material sewn behind the split of the overskirt, giving the appearance of an underskirt.

Cloth was made on local looms, often at home, and the highly skilled weaver would create textures and patterns that are not now seen, for example the diaper12 weave that produced an appearance of small lozenges in the woollen weave.

Letters show that even wealthy families went to auctions to purchase second hand clothes from the deceased. Reivers would steal not only cattle but bales of cloth or even the clothing of a victim. Even the Rev Timothy Pont was stripped of his clothes by thieves while surveying Scotland. (see Pont/Blaeu maps).

Reiver men wore clothing that was primarily functional in defending the wearer from the weather and from the blows of opponents. However clothing also served to show status, wealth and success as well as reflecting the fashion of the time.

Reivers would rob with equal harshness their neighbours in Scotland and their enemies in England. Velvet, silk, fine textiles, cloth of gold and silver, all were current materials in military costume. The fashion and material from civilian wardrobes were integrated with the leather and steel of the defensive clothing and paid for, more often than not, by beatings with the flat of the sword, or even the cut¬ting edge, rather than in hard cash. Should some men-at-arms meet a man or a woman, they would take everything he had, some¬times not even leaving a shirt. Fine cloths, gold chains, enamelled jewels, all could be had cheaply to garnish the armours. The Rev Timothy Pont was stripped of his clothes by thieves while surveying Scotland. (see Pont/Blaeu maps).

Search these resources for outrage, inventory, complaint, losses to find more examples of clothing being stolen.

Let us refer to Maurice Maindron, that able connoisseur of the period, and quote his vivid description of the second half of the 15th century.  He wrote in his book Les Armes,

“Military luxury made looting easy, for the soldiers were continually in the field, robbing with equal harshness their hosts in friendly countries and their enemies in conquered territories.
“Velvet, silk, fine textiles, cloth of gold and silver, all were current materials in military costume; cloths, in fact, which were ‘borrowed’ from civilian wardrobes and paid for, more often than not, by beatings with the flat of the sword, or even the cut¬ting edge, rather than in hard cash. Should some men-at-arms meet a man or a woman, they would take everything he had, some¬times not even leaving a shirt. Indeed, up to the reign of Louis XI they were the masters of the territory, even more so in peace-time than in war, because there was then no risk of being surprised by the enemy. They despoiled the country methodically, killing and raping quite freely. It will be appreciated that, at that time, the soldier’s trade was a profitable occupation: fine cloths, gold chains, enamelled jewels, all could be had cheaply to garnish the armours.