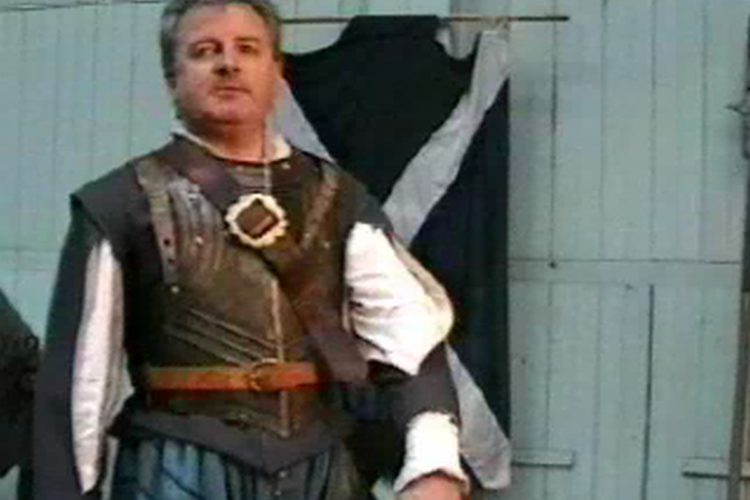 The Reiver is wearing what is called a jack or brigandean. It is a protective jacket which was worn as an alternative to plate armour or to chain mail. It has the great advantage of being light and flexible and still affords the wear a fair degree of protection against a sword thrust or lance thrust but much less protection from an arrow or a bullet.

Some of these garments had metal or horn plates which are sown into the lining between the inner and outer face thus providing the wearer with an extra layer of protection.

The jack was a lot cheaper to make and manufacture than a metal protective plate. The jack would usually have wooden or leather buttons, with very heavy duty stitching down the seams and along the lining. The high neck on the jack is there not just as a fashion, but is there to protect the wearer against sword thrusts or cuts to the back or side of the neck and to the throat.

The Reiver is wearing a copy based on one in the National Museum of Scotland. It dates from about 1575 to 1585. This form of protection of some sort or another was worn right through out the medieval period and worn in the civil war times.

This example of a jack is made from soft leather which is more comfortable to wear than the tough leather of the jack shown above. The space between the inner and outer layers of the jacket was filled with padding which not only absorbed blows but also kept the wearer warm.

The jack is sleeveless to allow the arms to wield their weapons more easily.

The Reiver is wearing body protection known as “breast and back” which is plate armour which covers the chest and back. There are two sections: a backplate and frontplate. They are joined by clasps at the shoulder which adjust to suit the height of the wearer and also by a belt at the waist which secures the breast and back across the lower portion.

This armour could have been worn by a horseman while out reiving and was often also worn with the full protective headgear. The record of the painting “Johnnie Armstrong Leaving” shows this type of armour.

Full armour was not often worn by Reivers because it was heavy and stopped the free movement of the reiving cattle rustler and thief. The Reivers often travelled great distances in a night and they and their horses would be exhausted if they carried heavy armour. Their victims were likely to be unarmed or unprotected. Quick, light raids were the trademark of the Reiver. Suits of armour were extremely expensive, costing the equivalent of £20,000 or £30,000 today compared with £100 or less for a stout leather jack.