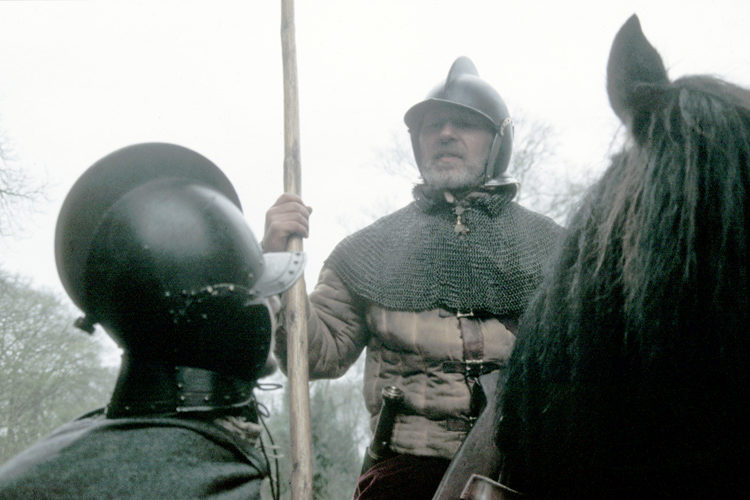 The Scots are coming! Everyone get your weapons and assemble [muster] in Carlisle to defend against the Scots, if you don’t muster then it is a capital offence – The Scots may kill you but if you don’t turn up to fight the Scots then we will kill you!

Lord Wharton’s Proclamation as Warden of the West March on June 14th 1547.

‘FORASMUCH as the Governor of Scotland, their Queen, and other noblemen of that realm, repaired to Pebles upon Sunday at night last, and also their ordnance coming from Edinburgh, of intent with a great army of the whole body of the said realm of Scotland to do some enterprize against the King’s Majesty’s possessions and subjects upon their West Marches :

THEREFORE, Thos. Wharton Knight, Lord Wharton, Lord Warden of the West Marches of England for anempst Scotland, captain of the King’s Majesty’s City of Carlisle, and one of his Highness’s most honourable council, strictly chargeth and commandeth in his Majesty’s name, that all his Highness’s subjects, horsemen and footmen, within the bounds of the said West Marche, prepare and come forward with 10 days victualls, as hath been appointed, so as they may be at Carlisle upon Monday next at noon, not failing hereof upon pain of death. ‘

The muster roll of the English Border 1547,

ie the men who were expected to come and defend the land was, according to The Border Papers :

Since ever able man was on the muster roll to defend the border, this roll gives an indication of the population of the English side of the border in 1547. Wp47

Extracts from The Lord Wardens Of The Marches Of England And Scotland by Howard Pease.  Limited to 500 copies.  Published 1912. Available free online from Cornell University Archives.org. Also in raw text.  Page references are in the form eg Wp55 = Wardens page 55

1580 Muster Roll problems.  The condition of the Border in the days of Kinmont Willie

In 1580 the condition between the two countries had deteriorated; raids were increasing and threatening the general peace. Various measures were introduced to improve matters.

Fewer men were turning up for musters. The causes were considered by Huntingdon to be, that the English Queen was granting leases of land to lesser lords, who looked only for profit and breeding cattle and not horses. So Huntingdon recommended the division of the Debatable Land and amendments to the Border laws.

In the Middle March the reasons for the reduction of men available for Border Service were; (1) the long peace between England and Scotland, (2) the owners of land taking rents and grass lets from tenants who were keeping cattle to manure and improve their land instead of breeding horses, (3) the leasing of the Queen’s lands to men from further south, (4) the absence of Keepers of castles and defensible houses, (5) deadly private feuds, (6) scarcity of horses, (7) the daily sale of such horses as were available into Scotland.

Other causes were the letting of land to Scotsmen on the English side whose cattle were not molested and reived because of their relationship to those raiding from the Scottish side. Many farms were being converted to sheep breeding.

Two principal castles, Norham and Wark were so greatly decayed that they would shortly fall down and were not habitable.

A survey of the whole of the English side was produced, the results of which showed how indefensible they were. Most of the castles were not held by the Crown but leased to the chief men of the area so that further fortification by the Crown would offend those men, whose power would be curtailed. These men were stated as mostly of an inferior sort, insolent through lack of education and antagonistic towards their superior lords. There was a possibility of revolt in the area.

Another survey was made of the arms available at those castles held by the Crown. Provisions were ordered and another complete muster of the whole Border was called when not one man turned up to represent the Baronies of Esk, Leven, Bewcastle and Kirklinton.
Other sources indicate that the names of these latter places were now heavily populated with men from the Scottish side of the border, indicating that they had been granted tenancies by the English overlords.