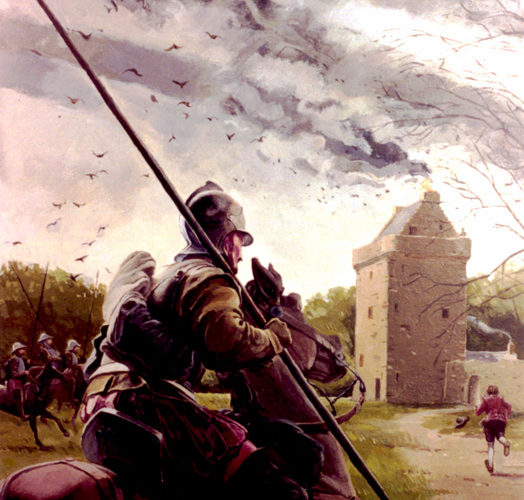 Hollows Tower stands on the right bank of the river Esk two miles north of Canonbie. A house was built at Hollows about 1518 by an Armstrong and burnt by Lord Dacre in 1528. The present building seems to be of late 16th century date with some later work above the wall-head.

The painting illustrates a late 16th century raid by the English Warden of the West March and his troopers on the Hollows Tower. The barmkin wall has been restored in the painting and the beacon on top of the south gable warns the neighbourhood of the approaching danger.

Hollows is well preserved and the recent re-roofing of the tower will prevent any deterioration of the structure. Splayed gun-loops defend all except the east wall which suggests that the barmkin, of which there is now no trace, was at one time on this side.

Watching the Border Beacons, Bells and Watchers England and Scotland were afraid of invasion from…