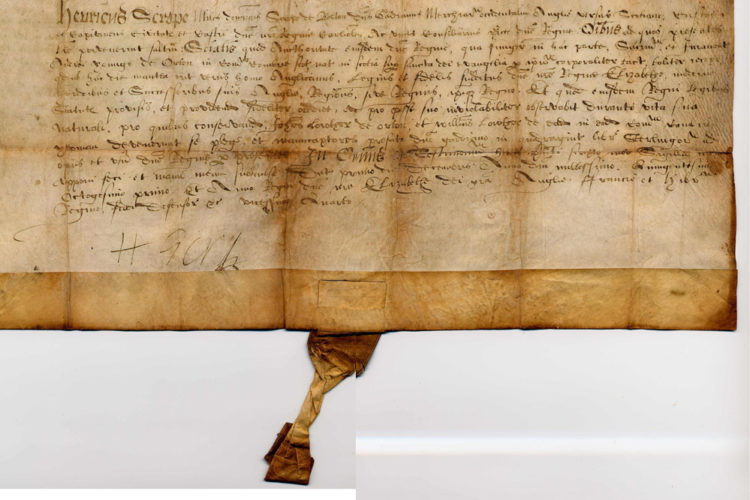 Naturalisation of a Scotsman

and Captain of the city and Castle of Carlisle

grants rights of Englishry to Andrew Young of Orton a Scotsman. 1581

Written in latin, not English, signed by Scrope, on the authority of the Queen Elizabeth I, Andrew Young has sworn an oath on the bible that from this day he shall be a true Englishman loyal and faithull to the Q – obey the laws, John & William Lowther or Orton stand surety for him, paying 40 pounds.

Free Translation (from the Latin)

Henry Scrope Knight Lord Scrope of Bolton Lord Warden of the West Marches of England towards Scotland Custodian and Captain of our Lady the Queen in the City and Castle of Carlisle and one of the Counsellors of the said Queen. To all to whom these presents shall come greeting —Know that, by the authority of the same Lady Queen, which runs in these parts, Andrew Young of orton in the county of Cumberland Scot, born in Scotland, has sworn an oath on the Holy Evangelist that from this day he will be a true Englishman loyal and faithful to our Lady the Queen Elizabeth and to her heirs and successors in this realm of England and that he will faithfully observe the laws and statutes during his natural life. For the surety of which John Lowther of Orton and William Lowther of the same place in the said County of Cumberland yeomen have pledged themselves, and have paid to the said Lord Warden the sum of forty pounds sterling (£40) for the use of our Lady Queen.

In witness of which we have fixed our seal to this writing the first day of December in the year of our Lord 1581 and in the twenty-fourth year of the reign of Elizabeth by the grace of God Queen of England, France and Ireland, Defender of the Faith.

Information: Naturalisation of a Scot

When England and Scotland were different countries, you could not travel from one country to the other without a permit. These permits were a letter and were like the first passports.

A law existed that did not allow an English and Scottish person to marry.

The punishments were severe. Not only could the offender be fined a lot of money, but if the local people thought that they were a spy then they could be killed.

There were different standards of living on each side of the border, and the money was different and confusing. Documents of the time refer to marks as well as pounds. Pounds could be English or Scottish and had different values.

Some clans had relations on both sides of the border and the English and Scots would meet at markets, horse-racing and even at football. Occasionally a person born in one country would want to change nationality. This document is a record of one person who gave up his Scottish citizenship to become English.