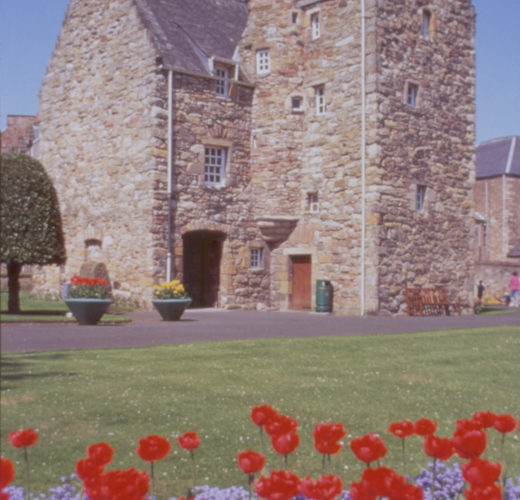 Queen Mary’s House has been considerably altered but its plan indicates that it was built in the late 16th century. The building has a definite resemblance to the bastle-house at Doddington in Northumberland which was built in 1584. The building was restored in 1929 by Jedburgh Town Council for use as a museum.

The house is built on the T-plan, the main block rises to three storeys and the wing is a storey higher. The ground-floor is vaulted and there is a newel stair in a turret which is corbelled out in the re-entrant angle between the main block and the protruding wing. The doorway is beneath this turret at ground-level.

Traditionally it is from this house that Mary Queen of Scots set out on her gruelling ride of nearly fifty miles to visit James Hepburn, Earl of Bothwell who was lying wounded at the Hermitage Castle after his encounter with Jock Elliot of the Park.

On her return she lay ill in the house for many days and in her later years of captivity, exclaimed in despair, “Would that I had died at Jethart”. The Bothwell incident took place in 1566, the Royal Commissions Inventory for Roxburgh considers that the house “was not built before the last quarter of the 16th century”. (RCAMS Rox. No.418)