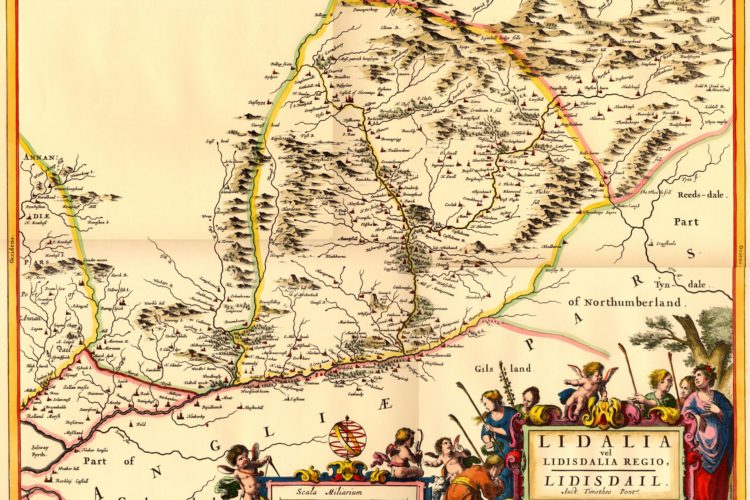 The border between England and Scotland was divided into Marches with a Warden of The March to administer his version of justice.  The maps were made by Blaeu of Netherlands from notes made by Timothy Pont later updated by Gordon Straloch and correspond with the valleys containing settlements, and not necessarily the Marches.  Liddesdale is shown on maps adjacent to Eskdale in the West March and Teviotdale in the Middle March. 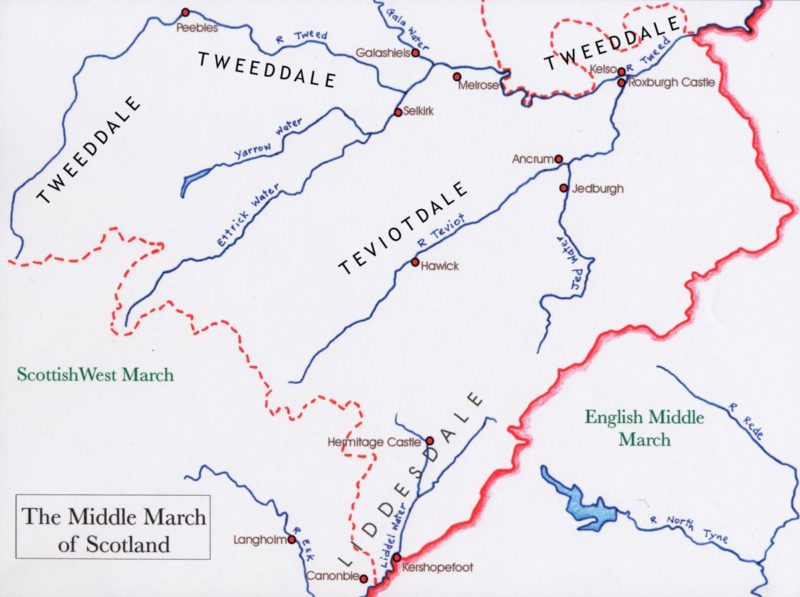 The notes made in 1600s by Timothy Pont and Gordon describe the region at that time and have been translated by the National Library of Scotland.

Liddesdale 1662 Middle March of Scotland with The Debateable Land 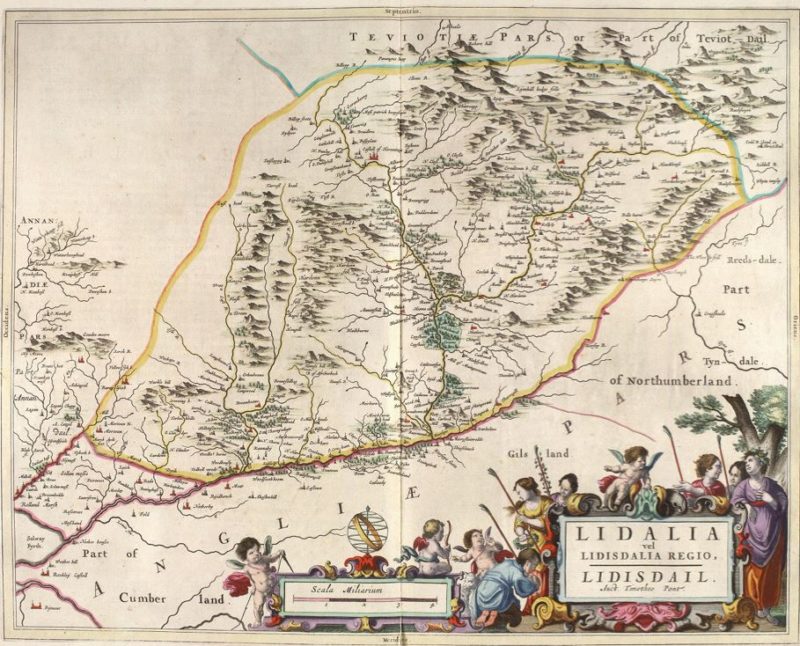 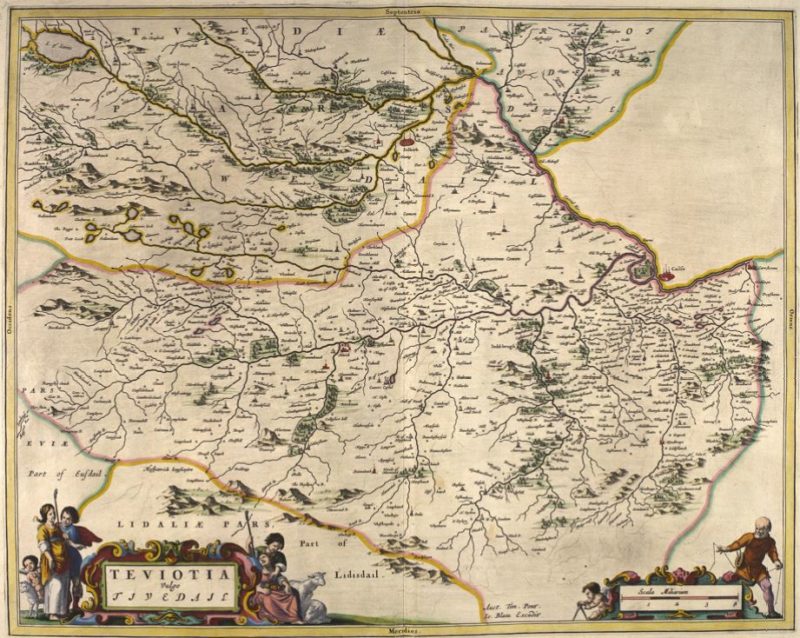 A map of Teviotdale, bounded to the northeast by the River Tweed from Carham and Kelso to Melrose, including the catchments of the River Teviot, the Ale Water, the Ettrick Water below Gamescleuch, the Yarrow Water below the Loch of Lowes and a stretch of the Tweed above Galashiels. The map provides a unique record, primarily of a dense distribution of small settlements, but also of mills, churches, castles, large houses and some woodland. The map was compiled from observation on the ground by Timothy Pont in the last two decades of the sixteenth century. It was engraved in Amsterdam from Pont’s draft manuscript, for publication in Blaeu’s Atlas Novus, first published in 1654, with later editions until 1664 and named “TEVIOTIA Vulgo TIVEDAIL 1654”

The River Teviot flows through Hawick, is joined by the Jed Water at Ancrum after leaving Jedburgh and finally the River Teviot joins the Tweed at Kelso 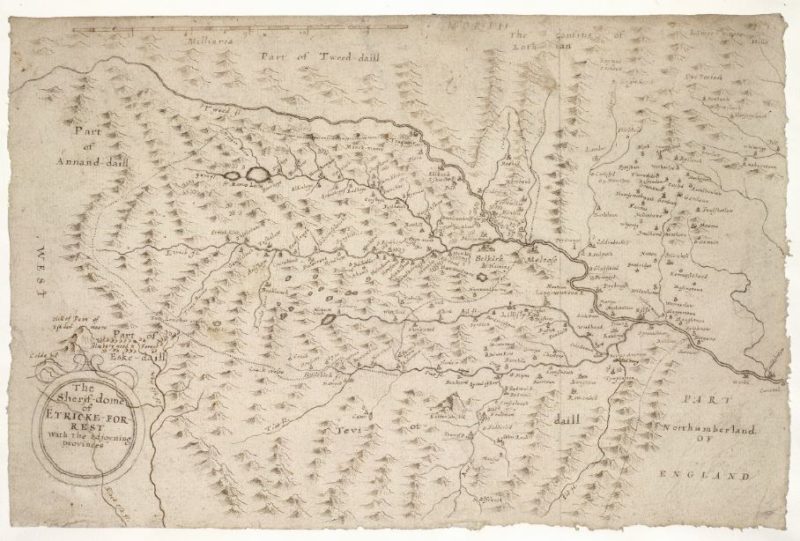 Teviotdale Ettrick Lauderdale Melrose Galashiels Roxburghshire:  A map of a part of the Borders, covering Teviotdale and the catchments of the Rule Water, Ale Water, Ettrick Water and Yarrow Water, and on the north bank of the River Tweed, between Coldstream and Traquair, the catchments of the Gala Water, Leader Water and Eden Water. The map was compiled by Robert Gordon of Straloch (1580-1661), at an unknown date after 1633. The source of the compilation was the observations of Timothy Pont, in the last two decades of the sixteenth century. Another map by Gordon with similar coverage is extant in the National Library of Scotland, in a different collection (Advocates MS.15.1.1).

Ettrick Water joins Yarrow Water and flows through Selkirk. The River Tweed flows by Melrose and Kelso and Roxburgh Castle.  The Sheryf-dome of Etricke Forrest with the adjoyning provinces 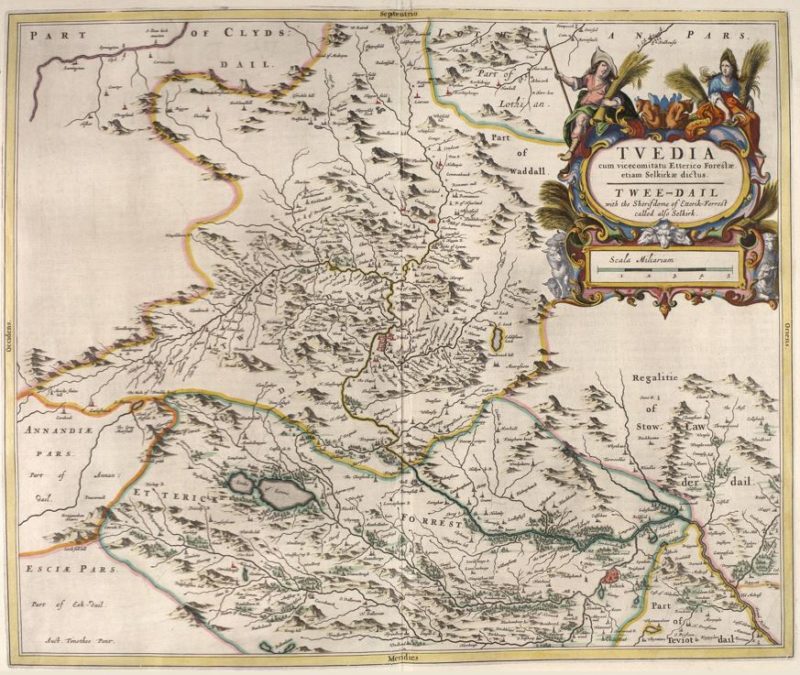 The River Tweed and Tweeddale start on the north side of The Devil’s Beeftub, but to the south of the Beeftub side is the start of River Annan and Annandale.  The Tweed flows through Peebles then accumulates the Yarrow Water, Ettrick Water, Gala Water and flows west through Melrose to Kelso.

Teviotdale The Middle March of Scotland 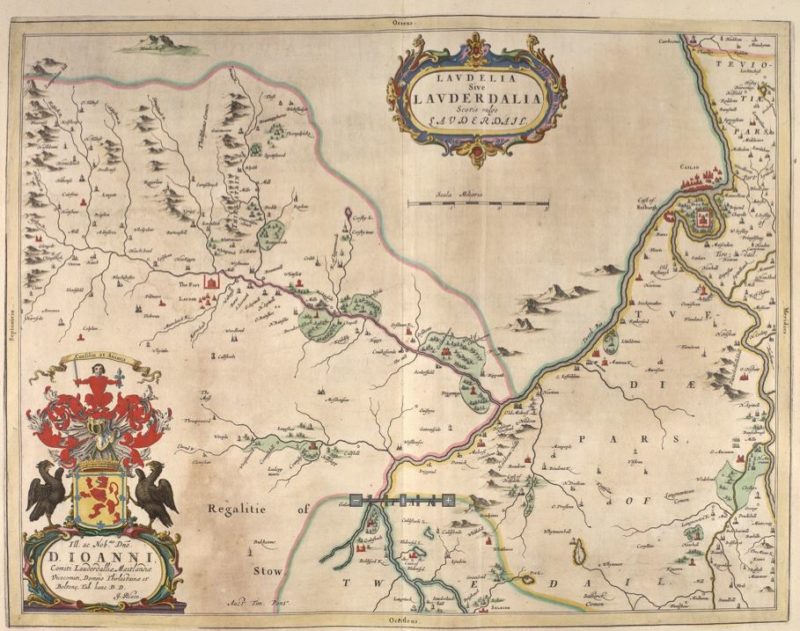 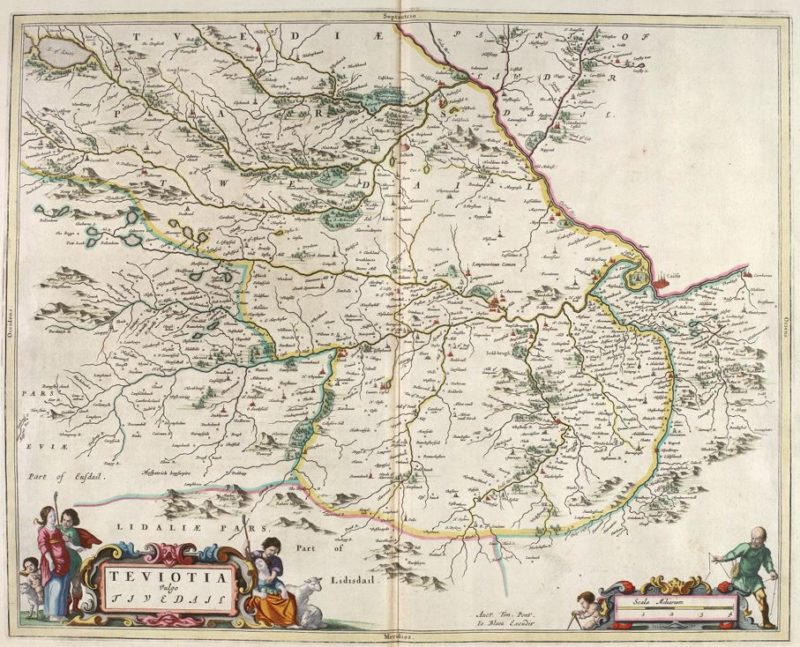 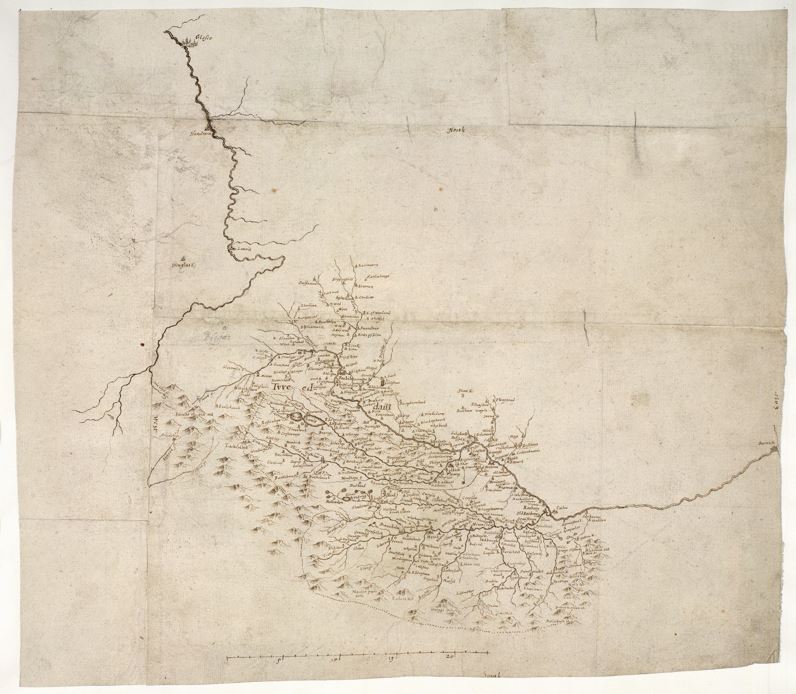 Kelso to head of Tweed.  A small scale map showing both the Clyde and the Tweed in entirety, compiled by Robert Gordon of Straloch (1580-1661) at an unknown date after 1633. Detail is confined to the River Tweed above Carham, although including the tributary watershed areas of the Teviot Water and the Ettrick Water. The source of the compilation was the observations of Timothy Pont, in the last two decades of the sixteenth century. More detailed coverage by Pont of that part of the Borders can be found in a map entitled TVEDIA published by Blaeu in his Atlas Novus of 1654.  The source of the Tweed is shown at “Airicks stain” which also shows the River Annan flowing south at the place now known as “The Devil’s Beeftub” of Annandale.

Eskdale Liddesdale sketch by Robert Gordon sketch from Timothy Pont observations.  This map of Eskdale and Liddesdale in the Borders is an uncompleted draft compiled by Robert Gordon of Straloch (1580-1661), at an unknown date after 1633. It includes a part of the Solway Moss which lies to the south of the border between England and Scotland and the coastal outline of the Solway Firth. The detail includes both settlement and named hills. The main source of the compilation is likely to be the observations of the mapmaker Timothy Pont (?1580-?1614), in the last two decades of the sixteenth century. 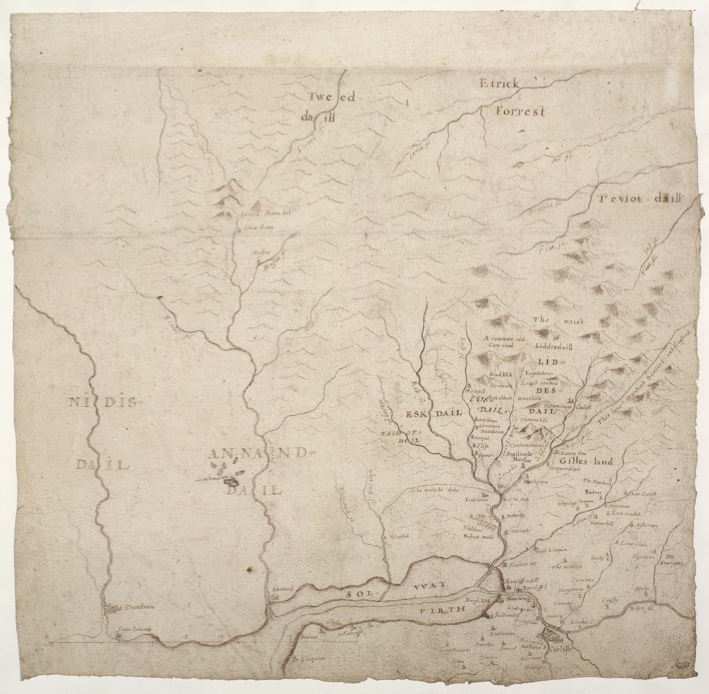 A map of the western part of the border lands between England and Scotland, compiled by Robert Gordon of Straloch (1580-1661), at an unknown date after 1633. It includes the River Nith on the west, the upper reaches of the Tweed and Teviot in the north, the lower reaches of the Eden in the east and Cumbria west of Carlisle in the south. Settlement detail is confined to Ewesdale, Eskdale and northern Cumbria. The source of much of the Scottish coverage was probably the observations on the ground of Timothy Pont, in the last two decades of the sixteenth century, but the origins of the coverage south of the border has not yet been established.  The Cumbrian region is from Bowness on Solway to Carlisle [Carlille] to Brampton

The border between Scotland and England is shown and goes along The Marche Dyke but the later map by Moll 1725 shows the border to the north of the “March Dyck”.  See file: Annandale Eskdale and Liddesdale 1725