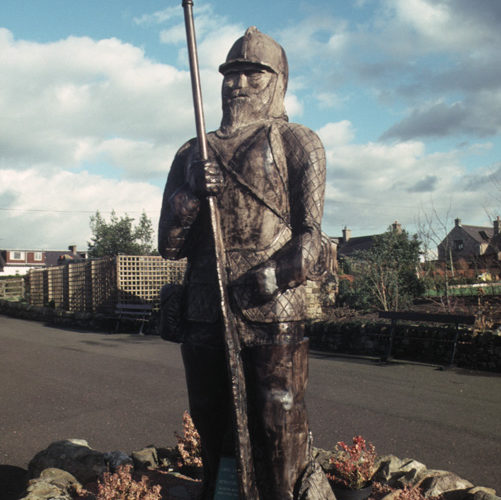 Lang Sandie is a prominently sited piece of public sculpture, standing by the roadside at Rowanburn, near Canonbie in Dumfriesshire; less than a mile from the frontier that he so often crossed on his reiving forays into England in search of plunder.

Lang Sandie of Rowanburn, Border Reiver executed in 1606 runs the legend by the feet of the over-life-size Rowanburn Reiver. The wooden figure was carved by Roland Smith in 1997 in a primitive style that can probably best be described as an example of contemporary Border folk-art.

Lang Sandie was a brother of Kinmont Willie, he lived in Rowanburn and was sometimes called Sandy Armstrong of Morton Rigg. On the 16th June 1600 Sandy and Willie Kang Irvine along with twelve other men, including several of Sandie’s sons, ambushed Sir John Carmichael, the Warden of the Scottish West March near Langholm and though Carmichael made a run for it he was chased and shot dead. It was not until five years later that Sandie was caught and hanged for his part in the murder and it seems that his sons were hunted down too and hanged as accomplices.

The spelling of Sandie and Sandy seem to be interchangeable in early texts.