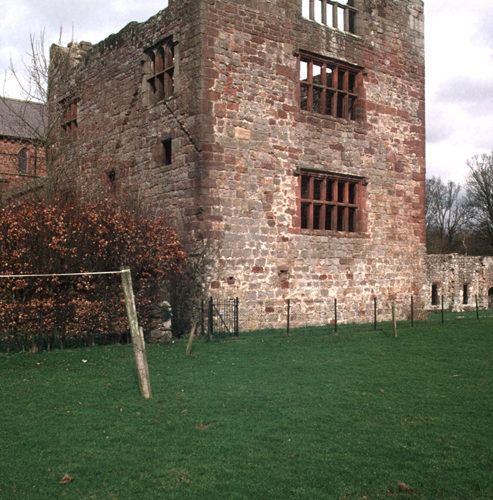 Lanercost, because of its position so close to the Border, suffered a series of devastating Scottish raids over the years. When David II plundered Lanercost in the 14th century, the Priory seems never to have quite recovered as it was reported to be poverty-stricken in 1409. The Priory was dissolved in 1536.

Thomas Dacre was granted Lanercost and its lands after the dissolution of the Priory as a reward for long military service. He adapted parts of the monastic range into a hall with an attached four-storey defensive tower, known as the “Dacre Tower”.

An earlier pele-tower at Lanercost is known as King Edward’s Tower probably on account of the small carved corbel head at roof level on the north face. It is said to have been the lodging of Edward I but the building probably dates from the 16th century.

Lanercost Chronicle
In the 14th century the Scots invaded and defeated the north of England. They entered through the East and Middle Marches and on their return via the west side they stopped at Carlisle where they besieged the city for ten days.

Lanercost Priory is 10 miles east of Carlisle and the monks recorded the events in latin and the documents became known as The Lanercost Chronicle. There is some bias and inaccuracies in the Chronicle but this account of the seige seems plausible.

Also, a little later in the same year, on the feast of S. Mary Magdalene,2 the King of Scotland, having mustered all his forces, came to Carlisle, invested the city and besieged it for ten days, trampling down all the crops, wasting the suburbs and all within the bounds, burning the whole of that district, and driving in a very great store of cattle for his army from Allerdale; Copland, and Westmorland.

But there were seven or eight similar machines within the city, besides other engines of war, which are called springalds, for discharging long darts, and staves with sockets for casting stones, which caused great fear and damage to those out¬side.