In 1580 the condition between Scotland and England had deteriorated; raids were increasing and threatening the general peace. Various measures were introduced to improve matters.

Fewer men were turning up for musters. The English Queen was granting leases of land to lesser lords, who looked only for profit and breeding cattle and not horses. So the division of the Debatable Land and amendments to the Border laws.

Land was being let to Scotsmen on the English side whose cattle were not molested and reived because of their relationship to those raiding from the Scottish side. Many farms were being converted to sheep breeding.

Two principal castles, Norham and Wark were so greatly decayed that they would shortly fall down and were not habitable. Most of the castles were not held by the Crown but leased to the chief men of the area so that further fortification by the Crown would offend those men, whose power would be curtailed.  Acomplete muster of the whole Border was called when not one man turned up to represent the Baronies of Esk, Leven, Bewcastle and Kirklinton. 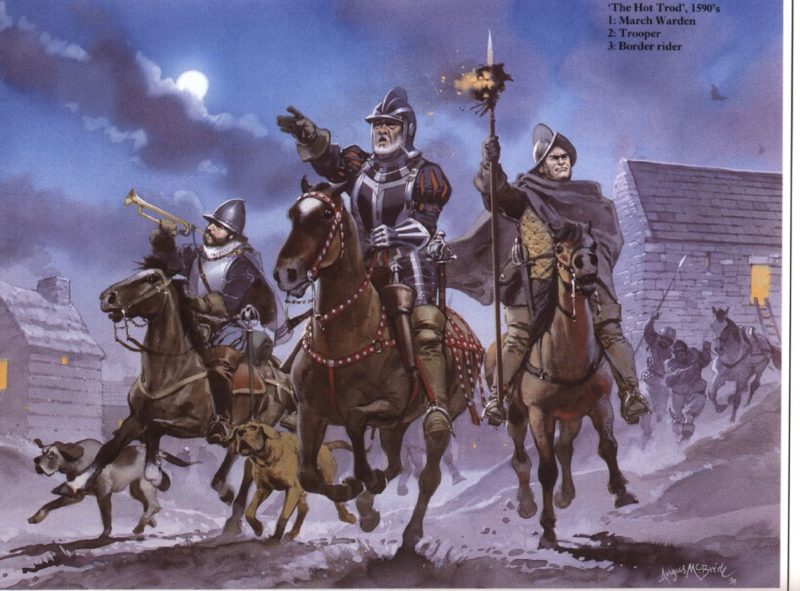 1530 Kinmont’s grandfather III Will Armstrong hanged by the boy king James V without trial at Teviothead together with John Armstrong of Gilnockie and Langholm and numerous others.

1541 Challenge by Armstrongs, to end by combat, the feud with Graham’s which had lasted from 1528. Feud ended. Kinmont had married a Graham daughter.

1542 Kinmont, his father and family fought on English side at the BattIe of Solway Moss and were eventually rewarded with lands in Cumbria by the English king. Following the battle the Armstrongs and Grahams of Esk, Liddel and the Debatable Land wholeheartedly supported the English cause.

1543 Mangerton and Whithaugh raid Peebles. 1545 Battle of Ancrum Moor -Arrnstrongs on English side.

1547 300 Armstrongs recorded as pledged to England under Kinmont’s father Alexander (Sandie). Kinmont and others attack and take Johnstone tower of Lockwood.

1550 August Lord Dacre rescued Sandie Armstrong’s (father of Kinmont Willie) tower of Sark from demolition. The Council of the North ordered Dacre to protect Sandie Arrnstrong and other adherents to the English Crown.

1553 6th October Kinmont’s sons Jock and Ecky of the Gingles raided the Stoneknowe, home of John Routledge and went on to that of Richard and Jeffrey Sowerbie with young Christopher Arrnstrong, son of John’s Christie, taking seven cows and oxen with another 16 oxen and cows, three horses and mares, and contents of the houses.

14th August -Gavin son of Hector Arrnstrong, Clement’s Edward and Hobb of Callally both English and Scottish took 120 goats from Hobb of Rampsgill.

1581 400 Scots led by Kinmont Willie conducted a daylight raid on the village of Haydon Bridge on the South Tyne.

1583 In September Lord Scrope is complaining to Walsingham that the Liddesdales (Armstrongs and Elliots) and those in the West March, especially Kinmont Willie, his sons and accomplices, were continually in the company of the Scottish Warden and therefore never arraigned for the offences against England. He asks for 100 horsemen and their pay to prevent their depredations.

On 30th August Bartram Myburn of Keme and Genkin Hunter of Waterhead, in Tynedale complain that Kinmont Willie, Hector of the Gingles, Thorn of the Gingles, Thomas called Andrew’s Thorn of the Gingles, John Forster, George Armstrong called Ringan’s Geordie and his son of Arcleton in Ewesdale, numbering a force of 300 persons had attacked the Keme, Redheugh, The Black Middens, Hillhouse, Waterhead, Starrhead, Boghead and High field, all in north Tynedale and burned most part of them, nearly all bastle houses, took away 400 cows and oxen, 400 sheep and goats, 30 horses and mares. They took the contents of the houses to the value of 200 pounds, killed six people and wounded eleven. 30 prisoners were taken and ransoms demanded. There remains a list of the prisoners.

August Dick Routledge of Kirklevington complains that Kinmont’s son Jock, Jock Armstrong of the Calfhills and 20 others took 20 cattle and oxen, two horses and all insight. They maimed Dick and his son to peril of death.

September Scrope reports to Walsingham dting nightly raids by Kinmont and his sons and accomplices and requests 100 horsemen to stop raids.

1584 Scrope offered to deliver to Cessford two Grahams in exchange for Kinmont Willie and his son Jock. This was refused. At this time five years had elapsed since there had been held a Warden’s court.

1584 22nd December. Kinmont Willie with the Laird Johnstone raided into the Fernyhurst wardenry against Scotland. 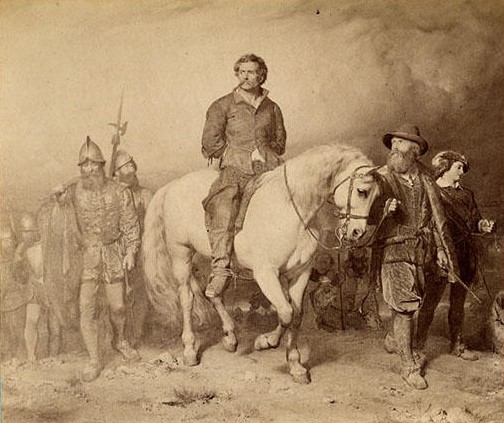 1586 16th November Kinmont Willie and others called before the Scottish King in Edinburgh and Willie received a payment of 100 crowns for services rendered.

The Earl of Angus, Home, Maxwell, Buccleuch, Kinmont Willie and other Borderers marched on Stirling to remove the Earl of Arran as Regent. Kinmont WiIlie returned home with horses, cattle, arms and armour and even the iron gratings from the windows, probably of the castle, as booty.

1587 24th February Kinmont and others burning houses in Scotland.

1587 A Royal expedition was mounted by the Scottish Crown to take Kinmont and Robert Maxwell, natural brother to Lo

rd Maxwell, prisoners follOWing which Kinmont comes under protection of Scott of Buccleuch, Keeper of Liddesdale.

1592 The Scottish king gave free pardon to all rebels except Lord Bothwell and the Armstrongs in generaL The principal barons in Maxwell’s office bound themselves against Maxwell. Bothwell was supporting Mary Queen of Scots. The Scottish king favoured Lord Maxwell who went with 400 men including Kinmont Willie to meet the king. 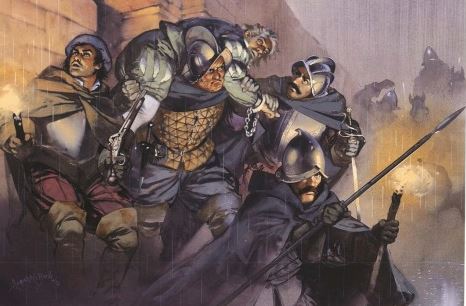 1593 Twentyman of Orton and his brother raided and taken prisoner and Kinmont removed 28 oxen, 4 mares, £8, weapons and riding gear, insight and wearing appareL Robert Twentyman taken into Scotland as prisoners of Kinmont Willie. 6th October -William Elliot of Larriston, the Laird of Mangerton and Kinmont WiIlie with 1000 horsemen ran an open day time foray in Teviotdale and drove off one thousand and five head of cattle, 1000 sheep .and goats, 24 horses and mares, burned an onset and a mill with £300 sterling and insight.

1594 Kinmont named as the chief of the Armstrongs in Scotland by Scrape. Kinmont offered assurances for good conduct and sent in a catalogue of names of his branch numbering 300 persons.

1597 The Captain of Bewcastle complained against John Armstrong, Keeper of Langholm Castle and Kinmont Willie for taking 24 horses and mares and himself prisoner for £200 sterling ransom. They had taken another 20 men prisoners and slaughtered some.

August Lord Scrope was accused of stealing away Kinmont Willie’s goods from his own house. He was further accused of burning Willie’s houses, spoiling his goods and killing two men and conducting himself as though he was Warden of both Marches and imagining he had a commission from both realms to punish and ride on the disordered people of that border at pleasure.

1600 11th July Lowther reported to Lord Cecil that Lord Herries and he had given a special proclamation against all raids and incursions yet divers gentlemen of the inner part of the march with at least 200 well appointed horsemen and 80 footsoldiers had run a day foray in Scotland above Sark tower when there was much fighting, no goods taken away but leaving the common people of England in great danger of reprisals. It seems however possible that some horses were taken for it was alleged that a mare and two horses one of which was bought back by Kinmont Willie.

From this calendar of events it may be deduced that in 1600 Kinmont Willie would be a minimum age of 54 years. There is no indication of his having taken part in the Border Clans and families violent depredations in Cumbria during the week of Queen Elizabeth’s death. This action eventually spelled the end of the main House of the Armstrongs in Liddesdale in 1612 with the execution of Archibald 10th of the line of Mangerton.

Kinmont Willie Armstrong’s House of Sark remained in place up to and beyond the English Civil War, when after all the years of antagonism to the Stuart dynasty, they had now become staunch Royalists, whole heartedly supporting them. 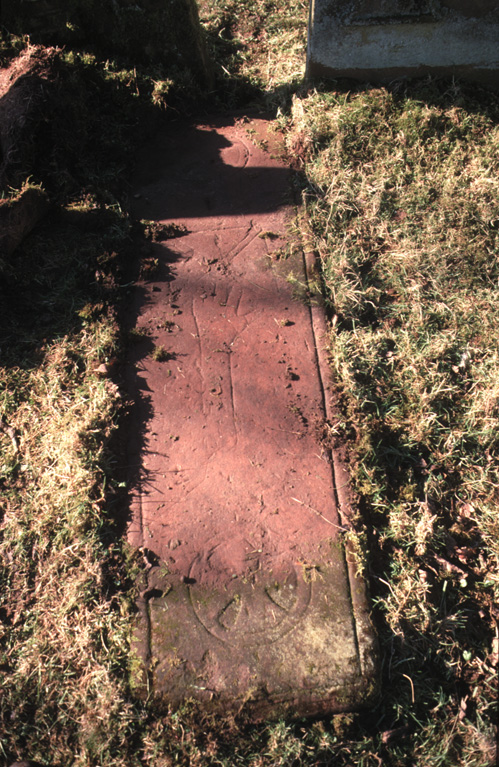 In the Kirkyard are memorials dating back to the early 17th century. The earliest has been identified recently as the grave-slab of the old Reiver Kinmont Willie Armstrong of Morton and Sark whose last raid, probably on High or Low Hesket, took place in 1602 and he seems to have still been alive two years later.

Kinmont Willie’s recumbent sandstone grave-slab is about 6ft long and 18 inches wide and carries no lettering. The edge is finished with a simple roll-moulding and at each end of the face of the slab are incised well-proportioned Teutonic crosses or crosses ”patty’, with splayed arms, and set within a wheel or double circle. Between these well executed symbols, in the central part of the slab, the carving is crude as if by another more primitive hand. It is these symbols that have led to the identification of the grave-slab as that of Kinmont Willie Armstrong. A forearm, with an outstretched hand (the Armstrong heraldic crest) seems to reach out of the slab to touch the rather askew national flag of Scotland. Such are the curious remains of Willie’s grave-slab and, though the attribution cannot be certain, Willie’s tower at Morton Rigg was within yards of the Kirkyard so there seems to be a strong probability that this is indeed the last resting place of the old villain.