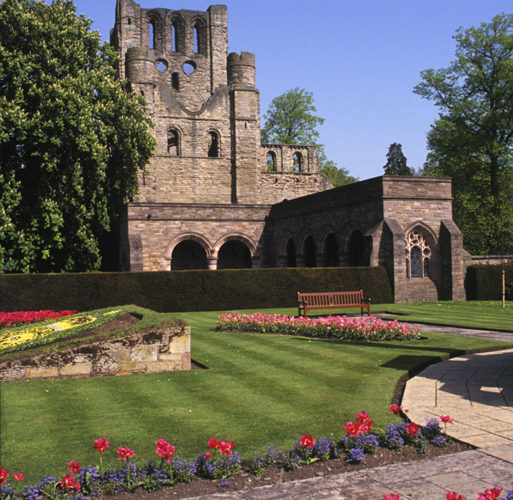 The turbulent years in Anglo-Scottish relations between 1543 and 1549 have become known as the “Rough Wooing”. In 1545 Henry VIII despatched the Earl of Hertford on a raid into the Borders to cause as much destruction as possible in an effort to subdue the Scots and subject them to his will.

Hertford was instructed to fortify and garrison Kelso Abbey against the Scots but first he had to take it for it was strongly held by a hundred men and twelve monks. However Hertford’s cannon soon breached the walls, making an assault by the Spanish mercenaries of Signor de Gamboa practical.

In the first assault three or four Spaniards were killed by the Scots musketeers though the defence was driven back from the walls into the Abbey Church. That night thirteen of the defenders escaped over the wall with the aid of bell-ropes, though two were captured and killed.

As dawn broke the Spaniards, maddened by their losses, renewed their onslaught on the Abbey.

It was soon over; outnumbered, their ammunition spent, the dwindling band of defenders was driven into the church tower where they were butchered to the last man.

Hertford and his engineers however rejected the Abbey as a suitable fortress site in favour of the nearby ruins of Roxburgh Castle. Hertford had the lead stripped from the roof of Kelso Abbey and sent it in wagons to Wark Castle.