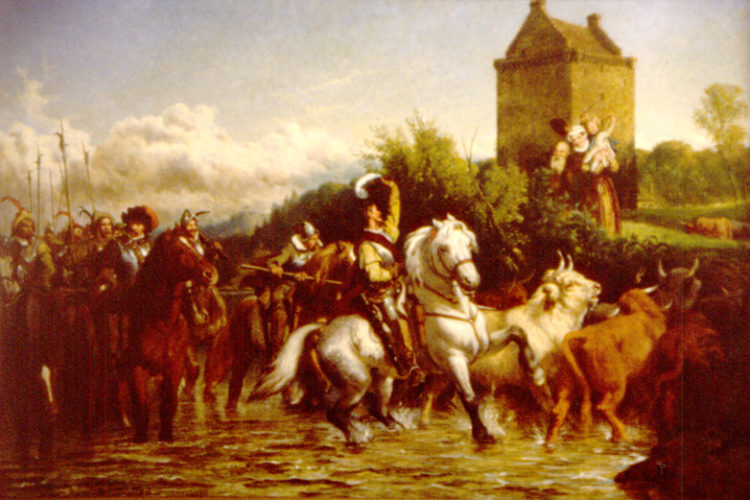 Henry Hetherington Emerson (1831-1895) was a Northumbrian painter best known for his portraits, landscapes, murals and illustrations. He was born at Chester-le-Street and studied in Newcastle and at the RA schools. He lived for some time at Rothbury and worked under the patronage of Lord Armstrong.

There is a good collection of Emerson’s work at Cragside, the home of Lord Armstrong, now in the care of the National Trust. The painting depicts the Laird of Gilnockie as the hero of romance, returning with his riders from a successful foray. The tower house in the background is the Hollows Tower in Eskdale.

In 1530 James V came down to the borders with the intention of pacifying them. He may have lured Black Jock and his men to Carlenrig in Teviotdale with the promise of a pardon for their depredations.

Whatever the truth, and there is little real evidence to go on, the final words attributed to Johnnie Armstrong have a proudly defiant ring to them; “I am but a fool to seek grace at a graceless face. But had I know, sir, that you would have taken my life this day, I should have lived on the Borders in spite of King Harry and you both, for I know King Harry would down-weigh my best horse with gold to know that I were condemned to die this day”.

Painting Johnny Armstron Return ©National Trust, Cragside, Rothbury, Northumberland Record ID: T5015 Not available for licence. Do not copy except for classroom use.