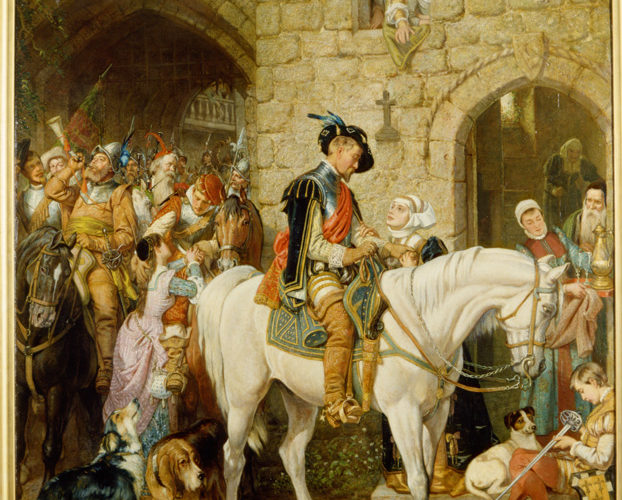 Henry Hetherington Emerson (1831-1895) was a Northumbrian painter best known for his portraits, landscapes, murals and illustrations. He was born at Chester-le-Street and studied in Newcastle and at the RA schools. He lived for some time at Rothbury and worked under the patronage of Lord Armstrong.

Emerson’s painting of the Laird of Gilnockie, depicts him as the hero of romance in a theatrical setting. Johnnie’s pose strikes a sombre note, a hint of his impending doom perhaps, as he takes leave of his anxious wife amid the lively scene about him. The dogs seem to know the outcome of the business too.

Johnnie Armstrong of Gilnockie is perhaps the most famous Border Reiver of them all. He is probably best known from the manner of his death and the ballad woven about the events than from anything that has come down to us in the historical record. In 1530 James V came down to the borders with the intention of pacifying them. He may have lured Black Jock and his men to Carlenrig with the promise of a pardon for their depredations.

Whatever the truth, and there is little real evidence to go on, the final words attributed to Johnnie Armstrong have a proudly defiant ring to them; “I am but a fool to seek grace at a graceless face. But had I know, sir, that you would have taken my life this day, I should have lived on the Borders in spite of King Harry and you both, for I know King Harry would down-weigh my best horse with gold to know that I were condemned to die this day”.

Painting Johnny Armstrong leaving WMS ©Tyne & Wear Museums
Not available for licence. Do not copy except for classroom use.